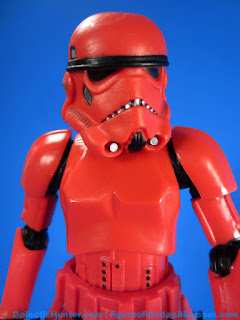 Bio: Specially trained for operations in the extreme temperatures of volcanic areas, these crimson-clad Stormtroopers stay cool in the heat of battle. (Taken from the figure's packaging.) 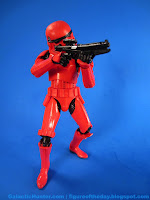 Commentary:  Why the Crimson Stormtrooper?  This has been on my bucket list for a while - I read an article back in 1995 called "Lumiya: Dark Star of the Empire," which was basically a little story with an awesome piece of art that stuck with me and was frequently on my short-list of things to ask for as 3 3/4-inch exclusive sets, one of which got pretty close to a thing that was actually happening.  This didn't work out because, at the time of my pitch, I was informed that Hasbro was doing the Luke/Lumiya comic pack.  Harumph.  Anyway, this was something I've wanted for ages and now it's available as a 6-inch figure.  You're welcome.  (Please buy it.)

There are very few strains of pre-prequel colorful Stormtroopers as of yet untapped by manufacturers, but they do exist - so seeing things like this one make me pretty happy.  The figure is a pretty solid red, complete with the appropriate markings.  There are grey bits on the helmet and belt grenade.  Black elements representing the body suit and holster are present as well.  If that weren't enough, there's a tiny bit of silver on the "teeth," the side of the smaller blaster, and covering the rifle as faux weathering.   In other words, it's pretty much as good as the regular Stormtroopers. 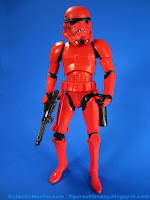 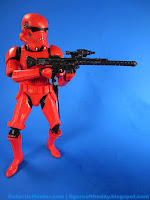 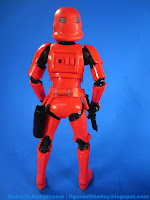 Other than Gentle Giant's Magma Stormtrooper statue, any sort of all-red Stormtrooper has been pretty much nonexistent as toys and collectibles go.   When it comes to movie-based variations on the classic Stormtrooper, blaster damage and grass stains can only take you so far - seeing things like the Battlefront Shock Trooper and this Crimson Stormtrooper help to expand the galaxy a bit more before we see what I assume will be many flavors in the various spin-off movies.   I'm stoked Hasbro used the existing (and fairly good) mold with double-jointed elbows and knees, mostly because it seems they're slowly phasing those out of their 6-inch figures with each new design.   At this point I'm just hoping they make a 3 3/4-inch one too, mostly because I still see that as the figure line of record - and we're missing a few other, larger (and smaller) figures in that scale still.

Thank you. NOW we need a 6" Lumiya! Can you make that happen please?