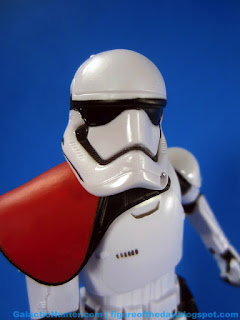 Bio: Equipped with sleek armor and powerful weapons, the Stormtroopers enforce the will of the First Order.   (Taken from the figure's packaging.) 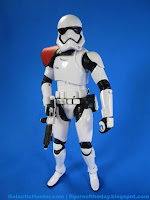 Commentary:  What a difference a few months make!  A few months ago we were freaking out over a first-look package variant of this trooper.  But now, the First Order Stormtrooper Officer marks the third release of the mold, and it's arguably the best one.  Why?  Because if you want an officer, he's got the shoulder pad.  If you don't, you can pop off his head and remove it - and presto, you've got a trooper. 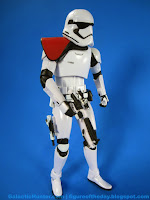 So, that's you're selling point - new shoulder pad.  Otherwise, it's the same as the release from SDCC which got repackaged and sold to all in September.  While it's a pretty nifty figure, the elbows are still restricted in their movement and unless you're making a diorama, you probably won't want more than one or two of these.  If you only get one 6-inch Stormtrooper from this movie, an officer makes the most sense just because he grants you added options.   Also, thanks to a recent TV spot we know for sure that these costumes exist and will appear in the movie.

I like the base figure - but I don't love it, it's not as good as most of the 6-inch figures we've already been sold.  Granted, if he's just going to stand around anyway you don't need him to do a whole heck of a lot.