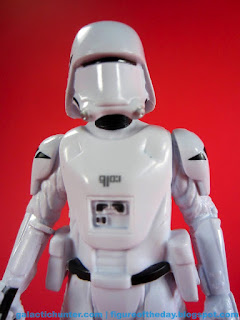 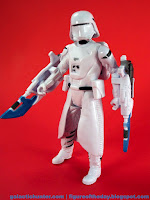 Commentary:  With a slightly different mold from the officer, this plain Snowtrooper is a decent army-builder.  Since 1995 Hasbro and Kenner have given us thousands of figures, many building on what came before to give us something newer, better, and more impressive.  This isn't one of those - we're still in 5-joint land, and while I have no problem with being there you really already know everything that you can do with this figure.  The deco on his chest armor has different flourishes and buttons than the Officer, but the glossy plastic armor bits are pretty much the same - and very nice, too!  The problem is as I sit here, after writing these since September, I'm struggling to find anything really interesting to tell you about this figure.  When I started writing about Star Wars in 1995 I tried to avoid writing about action figures because, well, they were $5.  For $5, there wasn't a lot of question as to if you should buy a line of a dozen figures.  Now we're thousands of figures in, and the answers seem to be not all that much different.  It's not bad.  It's not great.  The sculpt is good, but you could get the exact same sculpt as a 6-inch figure for roughly double the price, but with triple the articulation.  It's almost silly to ask if this sort of costume works as a figure or not, because you can look at it and go "of course it does."  It may not be exactly what you would expect in 2015, but it's pretty good.   The same basic complaints about pricing remain. 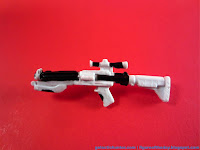 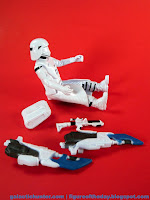 This trooper's accessories are, well, they're OK.  The blaster is similar to that of the Stormtroopers, but with a chunk extending out the back.   The white gun has some black markings, which helps to make it look true to the movie and a little safer to sell as a full-size toy.  The 6-inch figure has a similar weapon, but it doesn't have the "Combine!" weapons - a pair of snap-on blades.  Each one fits on the figure's wrists, giving him completely ridiculous weapons that would be out of place in nearly any modern action figure line.  They fit just fine on the wrists, but they're tonally very far off of the line's look and feel.  You can, however, take them and place them on a few other parts to build a small blue and white robot with knife hands and ski feet.  It's very peculiar, very 1980s in its silliness.  This is the kind of thing I'd probably really appreciate were it part of a line focusing on older figures and characters, but as part of something new I'm still beating my head against the wall trying to find things I like about them.  They add to the figure's cost and unless you collect the entire line, they're pretty useless. 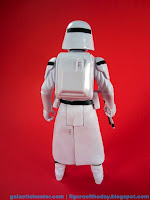 Since the figure stands and sits nicely - especially in the First Order Snowspeeder - I'd say you should get it.  It looks pretty good - really, its only crime is not being a little cheaper and a little more visually different from its Officer companion.  I'm sure more new and interesting things await us in the movie next month, but I will say this - if we can go one movie with no new different-but-not-that-different white armored troopers, I think we'll be in good shape.