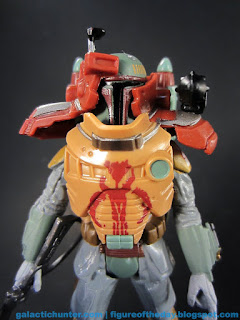 Bio: Hired by some of the galaxy's most dangerous villains, bounty hunter Boba Fett delivers Han Solo to the notorious gangster Jabba the Hutt.  (Taken from the figure's packaging.) 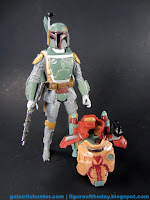 Commentary:  If you've been reading these, you know my opinion on the "Armor Up" figures.   Boba Fett fits the mold perfectly - this is a figure from 2013's Saga Legends and 2014's Mission Series line, rereleased at a higher price with a new, goofy, but oh-so-1990sy Kenner accessory.   If this figure were the same price as the other 5-jointed figures with a goofy weapon, I'd say you should get it.  But it costs roughly the same as two of those figures, so I'd nudge you toward waiting for a sale unless you're a competist because the core Boba Fett figure is effectively the same as the previous releases save for batch differences.  I also had a snag where this whole review had to be rewritten, so... that was fun. 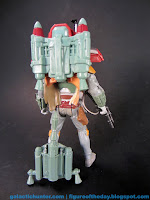 The figure itself is pretty slick - you can also get it in a $30 Slave I that just came out.  That would probably be my top pick, I don't have it in hand yet but a small vehicle with a figure is worth two of these figures easily.  If you're all-in, though, get 'em all and have a good time.  Boba Fett is jointed at the neck, shoulders, and hips with a hole in his back for the peg in his rocket pack.  As a Boba Fett figure, it's not bad - and it's probably cheaper than buying the 2013 single or the 2014 double-pack at current secondary market prices, so there's that.  The rangefinder doesn't move, but the sculpt is good and the deco certainly isn't bad.  It's a sturdy figure and while it may not be drowning in articulation, it's not bad.  (Granted at $10 or more, I expect more articulation.) 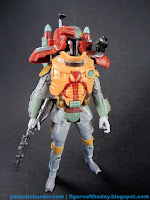 With expansive packaging offering a generous portion of air along with a unique painting on the front, the box hides the fact that there's not a lot to this figure.  The big selling point is a nifty piece of armor that feels like it came out of the fun parts of the Kenner 1990s Batman toys - snap-on armor or wacky spring-loaded gizmos were commonplace.  (I bought several.)  Boba Fett's new armor is a remixed box of Boba's toys, but lacks any actual play power.  It has its own integrated jetpack, so you can't plug in the regular movie version included in this box to the figure or his armor while he's armored up.    He has no problems standing or - amazingly - sitting, although the armor may prevent his ability to pilot a vehicle.  The chest features the skull from his shoulder pad, the coloring matches his armor nicely, and it has some orangeish red  that looks a lot like what was on the Return of the Jedi and prototype armor.  A sawed-off gun barrel sits on his shoulder for some reason, and the backpack sits super-high on his back -  behind his head, really.  It's silly, but it feels like something that might have been sold in the era of Robo-Strux toys.

This toy - heck, many of the toys - stretch the limits of what it means to be an all-in fans.  How minor a variation will keep you going, now that you know there are at least five more movies on the horizon plus potential anniversary lines, new TV shows, or game figures?  This is a keeper for fans of future kitsch, and all-in Boba fans.   Those of you looking for a place to cut corners, you could start here - but of all the Armor Up figures, this one captures the wackier aspects of "off-camera" toys better than most.  I wish it did something, but the way it remixes elements of Boba Fett's gear is gleefully 1980sish.   It disgusts me how amusing I find it, I know it's terrible but it might be my favorite from the assortment.  It's a shame they didn't change Boba's deco to a different armor suit so I could easily recommend it to everybody as being genuinely different, rather than just being a very expensive ticket to a new accessory you might not even want.

This figure makes me sad. The pompous a-hole in me is made sad by the fact that this figure used up resources that could have been used on something much more attractive to collectors with proper articulation, accessories and packaging.

But, the real reason it makes me sad is because if the 5 year old me reappeared today, he would have loved this figure, played it to death and, in 2035, spent $80 on Ebay to get a new one to relive his childhood. It makes me sad that I can't enjoy toys on that level any more.