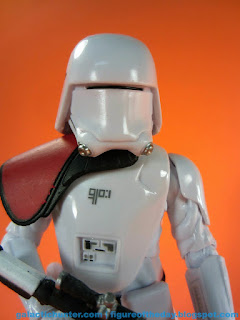 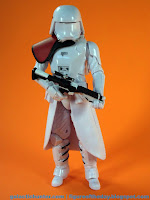 Commentary:  If the Snowtrooper Officer isn't just the regular Snowtrooper with a shoulder pad, I'll be surprised.   Comparing photos makes the two look nigh identical, which means I'm happy this one showed up first.   If they really, truly are the same only completists and army builders will need both.  Heck, do we even know if the pauldron is in the movie yet?   I have no idea, but I do know that this sure as heck looks like the new Snowtrooper from the photos I've seen. 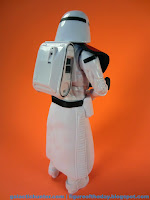 Anyway, the figure's build is similar to other new troopers - that is, the articulation is emphasized more on the legs, despite the kama (skirt) restricting the movements.  Each leg has 5 joints - double knees, rocker ankles - and it's pretty great.  You can only get so much movement, though, just because of the garment wrapping around it.  The arms are like other recent Troopers, which is to say bend-and-swivel wrists are joined by ball-jointed shoulders and elbows.  The double-jointed elbows seem to be a thing of the past.  The neck and waist joints are also perfectly good.  It's sturdy and stands up nicely, but the elbows aren't the most conducive to posing and looking cool with his gun. 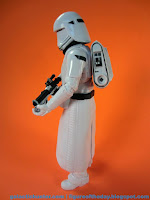 The sculpt is, well, it's very similar to the 3 3/4-inch figure - just with more joints.  The helmet is very glossy; it's quite nice.   The deco flourish on the chest is similar to the smaller figures, and we've got more detail on this one - but the chest deco is closer to the 3 3/4-inch regular Snowtrooper, with a smaller/darker chest design and the buttons being painted rather than their outlines.   I'm not saying either is superior, but it certainly works.   The difference in visual texture between the plastic armor and the cloth parts of the outfit is significant and obvious, which is fantastic - some of the figures don't have this kind of ccontrast.   Deco is more or less on par with the 3 3/4-inch figure, minus the backpack - that's where the paint goes.    Painted buttons, panels, and an outline look spectacular, especially when compared to the blank slate of the little versions.

I like it!  I don't know how perfect it is (or isn't) but I like it.  I'm beginning to feel the three-month pre-release window is too much, and more and more it seems like they had it right for the prequels - 1-2 months is plenty.   Being asked to invest hundreds of dollars in figures in hopes that I'll like the movie is something I rarely do - usually the toy has to be awesome in and of itself, something I would want regardless of the media tie-in.  That's also rare - and problematic for Star Wars as precious few toys offer genuinely new and fun features that are cool in and of themselves.  I'm having a ton of fun with that new Millennium Falcon, but most of the rest of the stuff just looks different from things I already own - and this figure is in that category.  I don't want to deal with the fuss of chasing down exclusives later, so I bought it - it's more of a compulsion than genuine reverence, I admit.   I don't dislike it, but I sincerely hope the movie makes me super happy to have all these new figures.

Collector's Notes: I got mine from Toys R Us at retail.