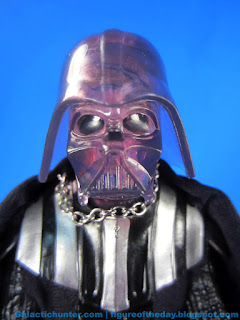 Bio: Unable to watch his son Luke Skywalker die at the hands of the Emperor, Darth Vader received a lethal blast of Force lightning as he hurled his master to his doom. (Taken from the figure's packaging.) 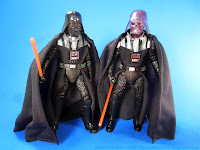 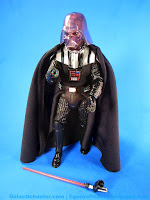 Commentary:  Depending on your point of view, Hasbro's 6-inch offerings for The Black Series since September have been pretty nicely optional. Variant costumes on figures you have mean you don't have to freak out if you miss this Darth Vader because there was one last year and odds are there will be another, different one later.   If you missed the first one, this one is different but pretty much the same - the key differences are the head and the paint job quality.  (It's better this time.) 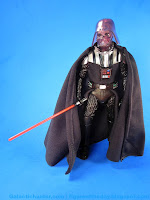 The body is mostly the same as the previous release, right down to the original toy's SKU stamped on his boot.   The only tooling change is in his right hand - the bend-and-swivel wrist has been replaced by a swivel wrist with removable hand.  You can see faux wire damage underneath, but not a lot of fancy sculpted damaged wires like on some of the 3 3/4-inch stumps.   It's different, and it's not bad - the body itself is actually a little darker, a little glossier, I daresay a richer armor suit.  The silver is shinier and the buttons are painted on more cleanly.  This is an improvement.  The only thing it doesn't have is a really good helmet, but the cape is stitched better and everything generally looks better.  I kind of wish they just threw in an alternate head so you could use this as a regular Vader, because it does look that much nicer.   Unlike the little guys, there are no snap-on energy bolts - or any indication of energy on his body at all.  The cloth cape with neck chain sit nicely. 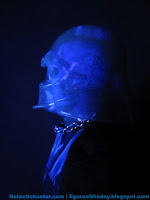 The head is new.  It's a skull wrapped in clear purple plastic, complete with internal lightning.  The good thing is that it feels like energy is going inside his head, but it also means that it's darkened by the clear purple helmet - so it looks sort of like veins.  The eye sockets are black and pop through the eyes on the helmet, which is otherwise undecorated.   It's a shadow of the iconic mask, more or less designed to toss his boss down a bottomless pit.   This is the embodiment of the American dream, right here.

Rounding out the set is a lightsaber, more or less the same as the first Vader.  The blade pops out and the hilt fits in the hand, albeit very tightly.   I dig it, but it's a very tight fit.  Sadly it can't be mounted on his belt, but hey - I'm sure Hasbro is already taking notes for Vader 2.0.   Double-jointed knees and rocker ankles make this figure great, but double-jointed elbows would be nice to have too - as it is, they're just the now-typical ball joints.   Not bad, but not great.   His left hand is also a bend-and-swivel joint, meaning he can use the Force or wave you away dismissively. 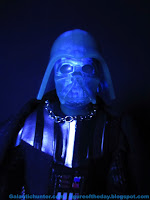 I like but do not love this figure.  It exposes some of the shortcomings of the original while giving you something different - but by no means necessary.   There are few variations that you can create with this figure, so it makes sense that Hasbro would want to keep Darth Vader in circulation for as long as possible.  For $20 it's great - for more than that, you'll probably wish it had more going on.   I'm not complaining, at least we got the few necessary changes to make it decent.   You won't need this figure, but you won't be sorry that you bought it.

Collector's Notes: I got mine from Walgreens' Drugstore.com portal - unlike my problems with Boba Fett, it actually arrived within 2 days.  I was impressed.

What'd look great if there's internal space is wiring this bad boy with an LED light in the torso to illuminate that purple translucent plastic.