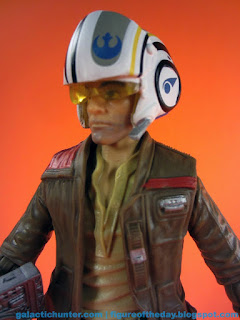 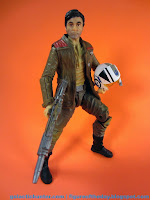 Commentary:  While we have a vague idea what function many characters serve by now, Poe Dameron is... a pilot.  Is he the new Han?  A new Wedge?   A traitor?  A hero?  We have no idea.  We do know he has an orange flight suit and at least two X-Wing Fighters, plus he has this jacket - which Finn has too.  Is it First Order surplus or standard issue for the Resistance forces?   I don't know.  I don't know much of anything, which really sort of makes collecting these toys sort of a bizarre gamble.  I'm not able to buy these toys because I saw a movie and liked it - I got these toys because the franchise has offered me more good than bad and I'm hoping that they work out and I'll be very  happy I own these figures come movie time.  More than likely, though, even if I love the movie all I'll really do is reorganize them on a shelf until Episode VIII when they'll all become a lot more exciting. 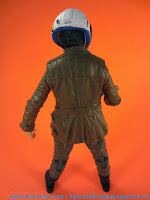 While Poe and Finn share a tailor, they don't share a sculpt.  This jacket has different wrinkles, and the head sculpt is cast in a different plastic with different deco than the flight suit version.  Neither one is screamingly Oscar Isaac in appearance, the elements are all here like the scruff and the hair but they don't quite add up to a perfect Poe from the early images we've seen.  An uneven scruff paint application can do wonders to make or break a figure, while no scruff at all is just, well, not notable.  On my sample you can see some weak spots in the paint, showing where the brushes didn't quite hit their mark.  It's subtle, but it does break the illusion of reality.   His upper lip got some of the scruff, too, so that's a little... off.  It's not the best head deco we've seen, but at least the eyes are clear and the hair seems to be covered evenly. 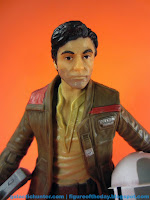 Poe's jacket looks great! There's some illusion of wear on it, plus various red and silver markings.  The sculpt is crisp and clean, I can only assume it's true to the movie because it's pretty finely detailed.  I assume that came from the actual prop.   The pants are nicely done, but the knees look a little weird - the yellow (what I assume to be) Jakku dirt has been described as "baby vomit."  It doesn't seem far off.   Similarly oddly matte are his boots, perfectly black but lacking in any real personality.  There's a shine you sometimes get on a Han Solo or a Darth Vader or even an X-Wing Luke that does wonders - not here.

Poe is an exceedingly average 6-inch action figure with 22ish points of articulation - I doubled-up on the bend-and-swivel wrists as well as the rocker ankles.   There's no cut at the boot, and single elbows are quite limiting, but other than that it seems to be a fairly nice and by-the-numbers action figure.  When working with price points and deadlines, there's probably only so much you can do.   The price point in particular leaves us only so much room to praise or complain, and at $40 for a set it's a decent value.  At $30, it's spectacular.   After getting a look at this one up close, though, I could see fans campaigning to Hasbro for better deco even if it meant a $1 or $2 price increase.  A little extra care put into the head paint masks at the factory could do wonders for making this one excellent, instead of someone else to hang out on a shelf until the movie gives him a personality.