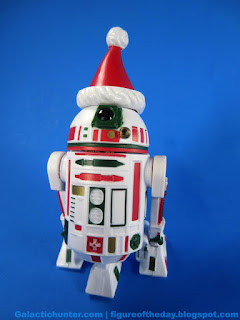 Bio: All different types of Astromech droids populate the Star Wars galaxy>  Each droid is different and has their own unique personality and colors.  This loyal Astromech is optimized to function and serve in remote, sub-zero environments.   Join R2-H15 on his adventures throughout the galaxy.  May the Force be with you... and your droids!  (Taken from the figure's packaging.) 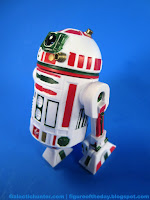 Commentary: Jedi Mickey  happened on Lucas' watch, so R2-H15 isn't really all that weird.  The name (Holiday 2015) tells you its function, with the hat and colors alluding to the fact that this is a Christmas souvenir.  His packaging copy goes out of its way to say "winter" while not actually telling you a single thing about the robot's function - is he from Ilum, Starkiller Base, Hoth, or some other snowy world?  From which faction does he come?   And where did he get that swell hat? 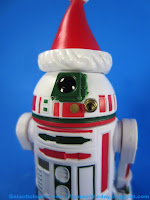 The figure is plain white plastic with green, red, and gold highlights.  You've seen white domes on Disney droids before, so this isn't entirely new - but it is unique in that you probably don't have many of these.   He looks a little bit like a snowman, albeit with much more decoration.   His backside is notable in that it's loaded with paint - often Hasbro makes a figure with a plain white back, while R2-H15 seems to have been given the droid equivalent of an ugly sweater.  Big red and gold panels - gold gold, like, metallic - are lines with green borders to draw in your eye.  Even the bottom of the figure has red and white panels, looking something like the robot equivalent of a candy cane.    It's almost nightmarishly festive. 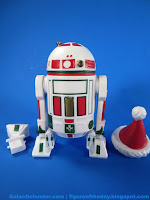 The hat is cute, but mine has a little ding in the red part.  It's metallic, sparkly red with hints of violet when the light hits it just right. The ball on top has a swirl, which I first assumed might be a little Death Star.  (It's not.)   It's a nice little accessory for the figure, although it might be going into a box unless R2-H15 goes into a holiday figure display with the Jawas, R2-D2, C-3PO, Red Vader, and so on.

I like it.  It's new enough to be interesting with a newly tooled hat and deco unlike anything I've got in my Star Wars toy box.   I won't say that you're guaranteed to love it, but if you're droid crazy like me you probably are just thrilled that it's a new figure with a new name and not R2-D2 with a new hat.  If you have the means, get this one - it's pretty cool.

Collector's Notes: Special thanks to Awesome Toy Blog's Matt Guzy for picking me up a sample at Disneyland!