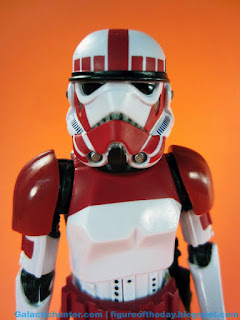 Bio: Adept with heavy weaponry, Shock Troopers serve as elite frontline forces and even as bodyguards for the Emperor himself.   (Taken from the figure's packaging.) 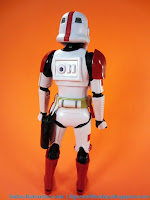 Commentary:  I haven't had to do a lot of pound-the-ground toy hunting in quite some time - these days (as an employee of the world's finest Internet toy collector store) I just get things online.  It works pretty well, but we don't get all the exclusives - so I had to make a map and spend a few hours locating a Imperial Shock Trooper.  Oh sure, the store locators said they were in stock, but "in stock" does not mean "on shelf."  More hunting was necessary, and much gas was wasted, and dinner was delayed.  (On the bright side, fellow citizens of Phoenix, the Toyko Express on Indian School is quite delightful.)   Was it worth going around for a red Stormtrooper that's not as red as the one we're selling at work?  I'd say it was. 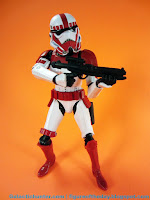 If you have a white Stormtrooper, you know what to expect here - a figure that is, without question, more interesting than the ones we're getting for the new movie.   They aren't bad as such, but the new line lacks double-jointed elbows that so many of us crave - so even though this is a figure from a video game, it's pretty fantastic.  You get the same guns with added silver wear and tear, and that looks fantastic.  As always the smaller blaster fits in the holster with no problems, and the guns fit in his hands just fine.   Repaints have to work with diminished expectations, and I would say that this is a good thing.   All Hasbro has to do is to deliver a figure that's as good as the exact same figure we got in the past, and they did.  There are no real surprises here, as he has bend-and-swivel wrists and rocker ankles.  The leg joints are a little stiff so it may take a few seconds to get them just-so to keep him standing, but it's not exactly a challenge. 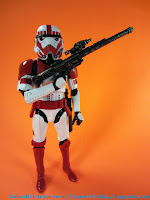 The figure is covered in Revenge of the Sith Shocktrooper-inspired red paint, with big stripes and bold blasts of crimson.   There's more to it, though - not only does it have the typical markings and the new red ones, but the belt was decorated a quasi-canvas color.   It's a little browner on the back, giving it a distinctive look.  This is pretty important, as this figure is Stormtrooper/Sandtrooper #8 in this scale - and we've got 2 more coming before the year is up.  Heck, maybe more - Hasbro never formally announced this figure or most of its 2015 offerings, leading to the dubious benefit of reduced competition in aisles and a general feeling of being less informed, more likely to miss out, and in some cases a growing desire to let completism die.   Nobody wins when they can't get the toys they want at suggested retail prices.

At $1 below non-exclusive regular figures, this is probably the best 6-inch value of the year.   Having not played the game - I only own a Wii U from the new console generation - I can't vouch for its on-screen accuracy.  I can, however, say it delivers prequel markings on trilogy figures.  Perhaps it's blasphemous, but I like it - there's only so much Hasbro can do to exploit its tooling library, and this is certainly more interesting than battle damage.  It's also frustrating because here's yet another figure that exists in the 6-inch line that doesn't exist as a 3 3/4-inch figure.   It is neat, though, but as with many of these figures this was bought out of habit as much as a hobby - I have zero emotional attachment to it other than that it looks cool.  Part of me wishes the line launched with this figure, because it's really nice - clean paint lines, glossy red shoulders and lower legs, and it's just so pretty to look at.   But now, in the context of a line of dozens of 6-inch figures, it struggles to stand out.

Collector's Notes: I got mine at Walmart on November 16 during what ended up being a roughly 3-hour hunt.  This is what happens when your wife leaves you alone for the night and you write about toys.