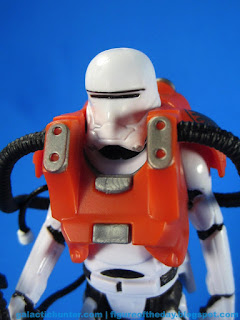 Bio: Specialized Stormtroopers of the First Order, Flametroopers carry incendiary weapons that can transform any battlefield into an infernal blaze.  (Taken from the figure's packaging.) 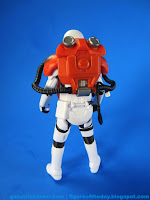 Commentary:  Buzz has it that the Flametrooper squad has a significant role in the movie, which I will not allude to here.   For that reason, it's possible fans may want one - or several - of them, so Hasbro's decision to include the same basic figure in at least three different sets so far (basic figure, this figure, Amazon's trooper boxed set) makes a lot of sense.  Even if you just buy one of everything, at a minimum, you'll get three of them.  Each includes different accessories or other figures, but they're all the same as this guy at their core.  They all have the same backpack and the same torch - it's the other stuff that sets them apart.  It's a decent enough figure - a little chunky, a little wobbly, and unable to hold his weapon with both hands.   The white plastic figure has very limited black deco, and all the parts fit together as long as you leave the orange First Order armor off.  That's when it gets awkward. 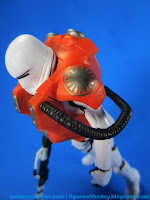 The orange armor itself is neat, and seems like it would have been better paired with another figure.  By wearing the orange armor, the figure's weapon no longer can plug in to a backpack - so there's a loose cord hanging around.  It's ugly.  The backpack itself must be stored elsewhere, as there's nowhere for it to connect to the armor.   While still ungainly, the ability to plug the backpack into the armor would have upped the elegance of this clunker significantly.  I dislike being unable to use all my accessories, but having the free-floating torch is just sort of bad planning. 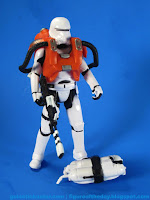 Stylistically, the armor isn't half bad - it just doesn't add to the existing figure's accessories.  If you had the bare figure and only this armor, the orange body armor might remind you of a fire fighter with its bright colors and goofy breathing tubes. Silver highlights provide a metal look, with big First Order symbols - the biggest in the toy line so far - on each shoulder.   Amazingly, the figure's armor in no way restricts its movement - he can swing his arms up or sit without a hitch.   It could be great, but I'm one of those weird kids who hated taking off Batman's cape so he could wear armor or a backpack.   They could do better, I thought, and that's still how I feel here.

The figure is pretty much acceptable.  The armor shows careful engineering as far as figure compatibility goes, but it disrupts the character's unique flame gear.   If I said it was terrible, I'd be lying - similarly, if I said it was a good deal, that's also a total fib.   All of the parts in this box are fun to futz with, but not all at once.  Had they included an alternate weapon with the figure and left the movie backpack out, I think this would have been a stronger package.  As a kid, this sort of thing would drive me bonkers.  As an adult, I just put it on the shelf in the back, admiring the goofy armor and hoping the next one I crack open will be a little less taxing on my inner child's playtime.

Grab those dollars while you can Hasbro. When the smoke clears after the movie and all you have left is the collectors that have been supporting you all these years will have had enough of this crap. You are literally biting the hand that has fed you.