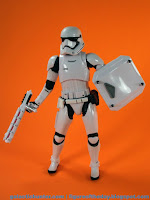 Bio: Armed with specialized weapons, the First Order's Riot Control Stormtroopers are trained to subdue crowds in the most ruthlessly efficient manner possible. (Taken from the figure's packaging.)

Commentary:  As names go, the First Order Riot Control Stormtrooper is in the running for one of the longest ever.   When it comes to documenting changes to this figure over the normal (or SDCC) First Order Stormtrooper, that's rather short - you get the same basic figure with the same two blasters, and two new accessories along with an all-new Poe Dameron figure.  This makes me assume that the run on this figure will be huge  because the notion of Hasbro giving Target an exclusive all-new figure at a low run does not compute. 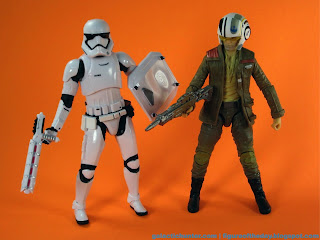 If you liked (or do not have) the previous iterations of the Stormtrooper, this is a perfectly good purchase.  It's pretty much the same thing with some changes in terms of quality.  One friend of mine said theirs had loose joints.  Another had problems standing.  Mine seems OK, except the right hand is a little more wide and open than I'd prefer for holding his baton and the bottom of the boots are a little rounded.   Getting his center of gravity may be tricky, and you  may want to modify the feet to stand flatter like the other versions of the trooper.  While I'm not crazy about buying multiples of this figure for new accessories, I do appreciate that at least it was an army builder and not Finn or Rey.   I can use more Stormtroopers to a point, and looking at "same figure with new pauldron" variants on the horizon, that point may be fast approaching. 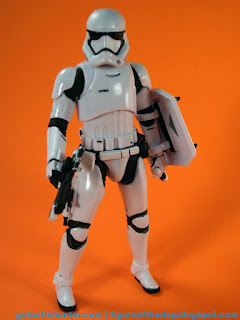 While the blasters work as well as they did before - they fit in his hand or plug into the thigh just fine - the riot shield and baton are new.  The shield reminds me a lot of the early McQuarrie Stormtrooper which had a giant shield - it's not quite the same thing, but by mixing a more modern take on riot control the figure takes on a more sinister air.  The baton fits well in his left hand, but the right hand on mine does not grip tightly enough out of the box to make much use of it.   Modifications may be needed, but they're both nifty new accessories and for what amounted to $30 with Poe, I got my money's worth.

It's a decent upgrade and a nice set overall.   You probably didn't need another Stormtrooper, but if someone offered you an accessory set for $10 and Poe in this costume for $20, you'd likely see it as worthwhile.   If you can take advantage of Target.com's various special offers (free shipping, 25% off) this is a wonderful set - obviously the Stormtrooper didn't add in better elbow joints or anything else since its last release, but for what you get and what it costs it's on the happy side of acceptable.