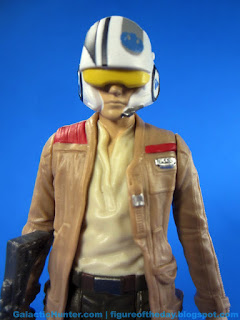 Bio: The modern incarnation of a classic design, the Incom T-70 X-wing fighter is the signature combat craft of the Resistance forces in their fight against the First Order. (Taken from the figure's packaging.)

Commentary:  While the Toys R Us TIE Fighter certainly walked the "just different enough to make you mad" qualifiers, Poe Dameron and his X-Wing are a bit more interesting.  The figure is - right now - exclusive to the vehicle, which is sufficiently different than the main line release.   Black and white plus orange and blue, we're getting a vehicle that's more than a tiny bit different and that makes a big difference.   The vehicle itself is pretty decent but has the same waxy plastic as its black cousin, with the same basic stickers and (at least on mine) perfectly straight cannons.  Plus the unique Poe figure.

As far as I can tell, Poe's body is pretty much the same as the armor version from September - I didn't see any immediately obvious differences in the limbs, torso, or jacket that I could pick out.   He has no real problems standing and is a bit of a challenge to get out of his vehicle - but he slips right in, easily.  Closing the hatch is easier than the regular release too.   His gun is the same, and fits right in his hand. 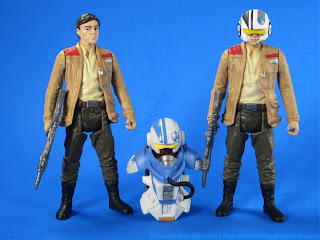 What makes this figure distinctive is the head - complete with molded-on helmet.   Just like the standard individually released pilot, there's no clear visor and it's pretty much the same design - except now it's white with blue and grey markings.  The face sculpt is not any different, so it still really doesn't look a heck of a lot like the actor.  A bit of hair is visible on the back of the helmet, and it's basically a scaled-down version of the 12-inch figure (with bike) from September.  It's a classic head swap - usually the vehicle isn't the selling point, but in this case I'd say you're going to want the figure just because the vehicle is fairly interesting.   $50 is a lot to ask, but seeing that Walmart has it during their busy season you may want to keep your eyes peeled.  It could end up on clearance in January, or all the moms and dads will clean them out not even realizing it's special.   I just decided it'd be easier to buy it and not fret later, and so far I do like this figure (and vehicle) more than the standard release.  It's handy that it just happens to be in Walmart's signature colors.

Collector's Notes: I got mine from Walmart on a retail shelf last week.  * - Right now all signs point to this being an exclusive - but please note, it does not come with an exclusive sticker and was never announced in any official capacity by Hasbro.  As such, this could turn out to be wrong - but as far as I know, it isn't a wide-release item.