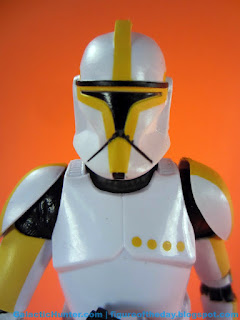 Bio: Created in secret by Kaminoan cloners, the first Clone Troopers were deployed to protect the Jedi during the battle of Geonosis. (Taken from the figure's packaging.)

Commentary:  Hasbro has our number. They know we like to "finish the set" now - so when they make a mold, they plan on making sure we can get the repaints.  Starscream means Thundercracker and Skywarp are coming, perhaps to be joined by Sunstorm or Acid Storm.   This Clone Trooper Commander is the yellow officer repaint - with him, we now have 4 of the 5 paint jobs this mold is obligated to get.  The blue one is still unavailable, so Hasbro has been good at getting us all of the different flavors.  Interestingly, the green one has off-white armor instead of white armor - I assume demand for a remake will start sooner or later. 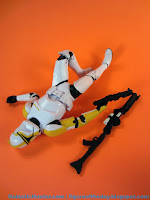 The mold itself is the same as previous releases, right down to the SKU of the white toy being stamped in the foot.   The articulation is the same too, meaning that it's pretty good with a helmet that seems to be a good fit for the body proportions.   Hasbro's rocker ankles, double-jointed knees and elbows, plus bend-and-swivel wrists give you a good range of movement.   It's not optimal, but you can get a lot of good poses out of it.   The hands are a little stiff so getting two hands to grip the gun well can take some fidgeting, but it's totally doable.  The deco is on par with the others, with yellow rank marks coming in nice and clean.   There are really no big surprises here - he's par for the course, he's good.

The weapons, though, are notably unique in their deco.   Elements have white deco on both blasters, whereas others clones were often grey or unpainted weaponry.   For that reason this one stands out a bit, but it seems consistency is not on the menu for all elements of all figures.  Hasbro gets close, but there's something a little different about each figure... thankfully if uniformity matters, each figure has two guns so you can give some short blasters and some long blasters and maybe that'll do fine for and compulsions about color uniformity thus far.  Me, I'll live with the white bits.

This is a good figure in a perfectly nice set.  I won't say it's amazing - it's not - but it's no worse or better than any other 6-inch Clone.   If you're getting all of these, you'll like this one too.