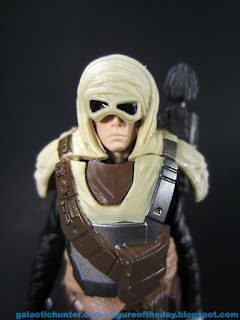 Bio: Convinced he can turn his father away from the dark side of the Force, Luke Skywalker surrenders to Darth Vader and is brought before the Emperor.  (Taken from the figure's packaging.) 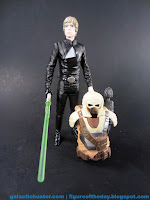 Commentary:  Due to a variety of factors, it makes sense that Hasbro would decide to launch The Force Awakens with some familiar faces - particularly given some are in the new movie.   Luke Skywalker is back with a Return of the Jedi repack of a figure from 2014 with a new bit of armor.  It's worth noting Luke was about $6 without the armor, and is now $13.  Either Hasbro's factory took them for a ride (and passed the savings along to us) or we're getting pretty good proof of why hype is more valuable than quality when it comes to moving figures with a collectible component.   Even though Luke is a figure you've had a shot at, this one keeps selling out at my local shops before Poe or other new guys.   Main characters are really important. 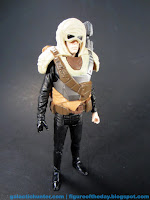 The figure itself comes from the later parts of Return of the Jedi.  His vest is gone, his one glove is present, and his hair is parted aggressively.   Luke has 5 points of articulation and since he was made in that 2013-2015 window when Hasbro developed an allergy to ball-jointed necks, his head can only swivel around.  Don't try to pop it off.  It's a pretty good Luke figure, and the costume detailing is simple but nice.  His hand is flesh plastic inset and glued in the arm!    His glove is painted black, so it's set apart from his shirt. His boots are mostly glossy, too, so that's another perk.  The lightsaber is pretty nice too - the fine detailing on the hilt is miles beyond what we choked down as "good" in 1996, plus there's a little gold detailing in there too.  The blade even has the flare that seems to be exiting the line on some of the newer figures, giving us a very good Luke figure.

The clamp-on armor and hat is... also present.   It adds about $7 to the cost of the figure, and only an idiot a collector would justify that as being a good deal.    It doesn't do anything.  It adds some wraps and goggles that may remind you of the 2008 figure's nifty sandstorm gear but the design doesn't make a lot of sense to me.  The head wrappings extend down to the shoulders, looking like mummy armor.  If this covered the entire figure it'd make sense, but there's also a brown gut with pouches and straps that wraps around the figure's front and back - and climbs up his back a fair amount, looking something like a backpack.   A blaster-like structure is embedded on his armor as well, non-removable and reminding you of the fun you could have if the figure had an actual gun instead of a fake one.   The accessory doesn't hurt Luke's ability to remain standing, and it doesn't get in the way if he wants to sit.  His wide shoulders may prevent him from getting in some vehicles, though. 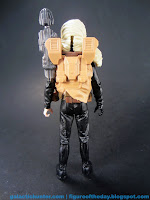 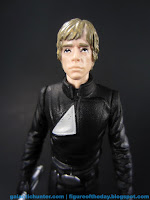 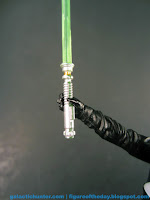 If you're on a budget, I'd suggest you get the single Saga Legends figure (originally about $6) or the Return of the Jedi 4-pack from earlier this year - which was originally $20 for 4 figures.  Obviously there's more going on here than inflation, and obviously your average consumer doesn't know the going rate for an action figure.  (Note: if you are reading anything about toys I have ever written, you are not the average consumer.)   This is a rotten deal, but if it ends up on clearance down the road or otherwise sold for below SRP it's a weird and delightful keeper.  But if you have kids, please, just buy them the 4-pack.  This is a bizarre look at what could be if we deviate more from the movies, which I really do enjoy in non-movie years.  In movie years, I don't have patience for this kind of stuff - and I'm hoping Hasbro kills this format of figure and accessory this year.