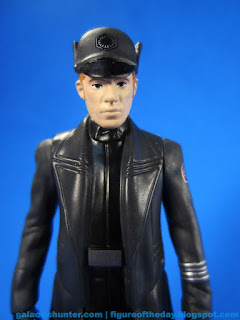 Bio: A young, ruthless officer in the First Order, General Hux has complete confidence in his troops, training methods, and weapons. (Taken from the figure's packaging.) 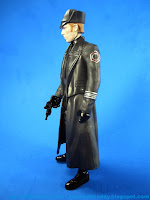 Commentary:  Your new fascist!  With visuals suggesting Toht from Raiders got mixed up with Grand Moff Tarkin and a stupid hat, General  Hux is our first First Order officer.   We don't know much about him, other than his sleeve has a cuff on it and his outfit is blacker than some of the other officers we've seen in the movies.   His long coat is designed similarly to the recent Endor Han Solo - the coat makes up the legs, and of course restricts the movement ever so slightly.   Like the other figures, this comes with the usual disclaimer - I ain't seen the movie so I don't know how good it is in terms of authenticity, but it passes the smell test.  This smells Star Wars-y. 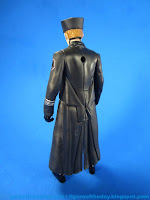 The character has a long, black coat with a cuff that reminds me a lot of Kirk's rank marks from the original Star Trek.   There's a First Order symbol on that shoulder as well as his hat, which is folded up in a way that I would say looks like the sci-fi fascist equivalent of Sherlock Holmes.  The back of his hat is folded up, and presumably is some sort of space ash tray.   The outfit under the coat is mostly obscured, so we don't know if he has code cylinders or rank badges.  The belt buckle is totally flat - the original trilogy buckles had some very, very minor detail.  His boots are glossy and black, fully painted and visible under the coat of you swing his legs forward.  I can't say if it's perfect, but I can say it feels like Hasbro didn't take any shortcuts. The head sculpt is nice, and reminds me a lot of a young Denis Leary.   He looks like he's a thug in a gang of retro-enthusiasts, which seems to be a decent estimation of the First Order's motive.   They're kids who liked what the Empire did, perhaps misguidedly, or perhaps they were just really fond of the space-trains running on time and also space-slavery.  He has no problems holding his blaster in his hand, and he can't really quite sit right - a common problem with figures with long bulky coats.  Some handle this better than others, this one is on the worse side of things.  I'm pretty forgiving of this because he can stand perfectly well, without tumbling over.   Most figures aren't going to get to pilot their own vehicles anyway, so I really don't have a legit complaint here.  I doubt Hux will ever see his own Mini-Rig or Starfighter. 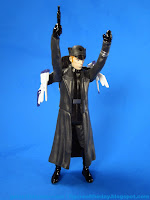 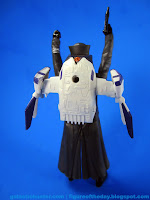 I like it!  It's a good figure.  I don't suppose it's great and I don't know what kind of screen time he gets, but he looks visibly different from my stash of commanders and moffs, so I'm all for it.   Get one if you can!  He's not bad.  He won't do much but stand around, but I assume his role in the movie gives him a similar amount of range.  (Prove me wrong, movie.)