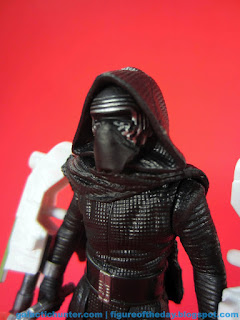 Bio: A dark warrior strong with the Force, Kylo Ren commands First Order missions with a temper as fiery as his unconventional lightsaber. (Taken from the figure's packaging.  It's the same one as the other one.) 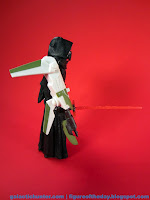 Commentary:  A new accessory!  Kylo Ren now has new weapons - but if you had the previous figure from wave 1, you've got this one.  It's still a figure with 5 joints, the same lightsaber, the same deco.  It's a great sculpt with wonderful detailing, but if you read the other review, this is the same figure.  And I'm just going to let you do that, because why spend the time? 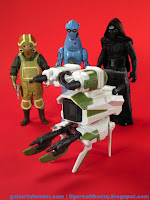 The new weapons are pretty neat - useless for this character, but neat.  Each one has a c-clamp that wraps around the wrists, plus pegs which tab in to Goss Toowers' big box accessory to form legs.   By themselves, Kylo's weapons are weird winged contraptions with the end of a Weequay pike at the end that pops out easily.  Hasbro has been reducing their reliance on metal pins and glue, so plastic merging with plastic is about all you can hope for some days.   I suppose you have to cut costs somewhere, but I can assure you kids who have this toy are going to lose all sorts of parts.  These seem like weird weapons for a figure in 2015, and have the kind of a feel you might expect from the weirder, fun Kenner Batman figures from the early 1990s.   I think they may be better for troopers, but these kinds of gizmos don't really work well for Sith-ish characters. 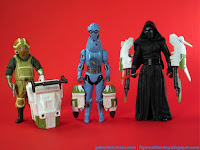 If you don't have a Kylo Ren figure, this is a good one.  I wish Hasbro included the Armor Up body with its unique limbs and head were used instead - sans snow - but such is life.  Get this one if you think you might like it, because there's not much  better to be had just yet.

I really don't get this whole series of pack-in accessories. They seem to me to be the worst idea in the history of the SW line.

Some of them are goofy, but that's just the sort of thing I absolutely loved as a kid. Reminds me of the adventure packs or whatever they were called in M.A.S.K. that had just a figure, a mask, and some type of themed accessory. Made for great play action.