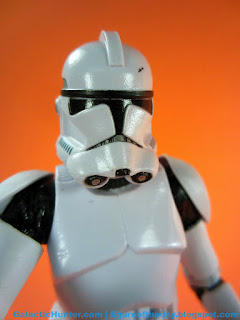 Bio: As the Clone Wars drew to an end, Chancellor Palpatine issued Order 66, turning the Clone Troopers against their Jedi allies. (Taken from the figure's packaging.) 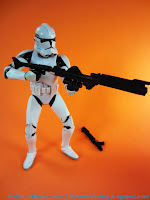 Commentary:  I must have some sort of Stockholm Syndrome, because I was genuinely pleased to see the 6-inch Phase II Clone Trooper in this set.  It was enough to get me to buy this set.  Sure, it's the existing body with a new head.  It is an exclusive, after all.  And yes, it has the original plain white Clone's SKU still stamped on his foot.   Still, you can't bring me down - it's our very first Revenge of the Sith Clone Trooper and while it probably means a lifetime's worth of exclusive repaints are coming, right now, at this moment, I'm very happy to own this figure.  The helmet is nice, the deco is... acceptable, let's say.

Given how inflation works, what $10 can buy you, and diminished expectations over time, I'd say this figure delivers about what we should expect before the inevitable price increases.   This isn't to say the figure is bad - far from it.  It does, however, illustrate what happens when white isn't white.  A common toy problem is to cast a part in dark plastic, and to paint over it in light paint.   More often than not the darker plastic shows through, as you can see in the Clone's knee pads, shoulder pads, and the back of his hands.  Otherwise, he's pretty white and nicely painted for a Hasbro figure.  Mine has a couple of black dots where there shouldn't be one, but given it's an Amazon exclusive my ability to pick out a good one is rather limited.  Heck, my box had torn Velcro tabs, too.  Thankfully the figure is mostly good, providing a decent basis from which to launch countless redecorated figures based on this template.

His guns are unpainted, and it's worth noting the back of his knee pad straps are pure white.  Phase I Clone figures in this scale have a little grey bck there. Other than the helmet feeling a smidgen small, I'd say Hasbro did a good job with this one.  I await the 501st and other variants sure to follow in the next several years.  I begrudgingly give the set a "Buy" for $80, mostly because the original Stormtrooper is rather uninspired.  I'd probably buy the rest in the assortments, but as of my typing this review I've only played with this one figure - let's see how the others shake out over the next few days.