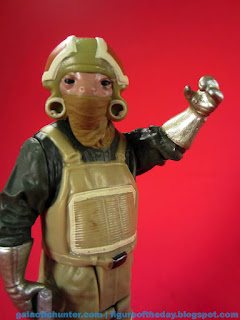 Bio: Goss Toowers is part of the tireless technical crew that provides mechanical support to the Resistance's fleet of starfighters. (Taken from the figure's packaging.) 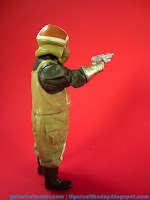 Commentary:  Should we care about Goss Toowers?  I'm not sure.  It's really tough to know which characters are a big deal or not unless they're on the poster, and Toowers is not.   He's not a little person alien like so many of these movies have had, but he is shorter than a few other characters while also being a little stockier.  Each hand has two fingers and a thumb, with gloves painted a gorgeous metallic green color.  It's pale, it's sickly, it's perfect.   His overalls are similarly pale and green, with a light trim.  He's got a big helmet that reminds me a lot of the old Cloud Car Pilot, and has rollers on the side that remind me of eyes for some reason. 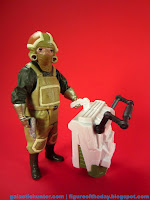 Like with many of the other aliens in this line so far, we really don't have any idea how he really looks.  We get a glimpse at eyes, a nose, and some pink skin with little else.  Is it a cute pig thing?   Does he even have a mouth?   (Will we ever see it in the movie?)   Part of the charm of classic 1970s and 1980s sci-fi flicks were what they avoided showing, so it's entirely possible that in an effort to keep authenticity high and budgets low they're deliberately replicating those classic constructions.   He can't really sit due to his bulk, but he stands just fine and has a gun.  I assume he'll be doing something more interesting than "stand there and fix things," because why would you not give a mechanic some tools?   Perhaps we'll find out in December.   Then again, it is Star Wars, and there's more money in questions than answers. 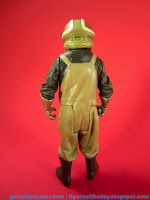 Aside from the gloves and head, this figure is very believable as something you might see on Earth, or failing that, a more realistic interpretation of Luigi.  He comes with a giant, huge, ridiculous COMBINE weapon which is described as a pistol.  No way, man.  It's too big to be held in one hand and there's little hope of him carrying it even with a display base to prop him up.   It looks sort of like a floor waxer - boxy, with added handles.  Combined with Kylo Ren's extras and PZ's pieces, you get a crab-like robot drone of some sort.  I assume.   This one doesn't feel as cohesive as some of the other more successful combined modes. 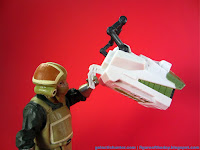 Unless Goss is comic relief or a spy or some sort of fun surprise, as a figure, he's not doing much for me.  He's not a bad looking figure - it's just, well, there he is.  It looks like it could fit in any of a number of existing planets of factions, thanks in part to a lack of affiliation markings.   I hope he ends up being cool, because right now he's just going to fill some space on a shelf.