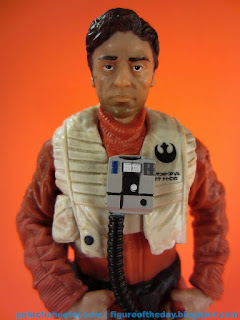 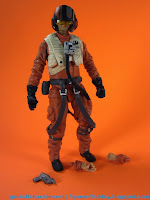 Commentary:  The other Poe Dameron figure comes in the traditional flight suit.   It's actually kind of neat - the deco and detailing are better than ever, while the shoes and likeness, well, not so much.   This one is neat because (like the other one) the name Poe is written on the back of the helmet in Aurebesh, and the white vest has the words "PULL TO INFLATE" written on it, upside-down.  So that took  me a minute to figure out, but it makes perfect sense - after all, Poe would need to be able to read it.  On the other hand, if someone was going around with a shirt with upside-down lettering on it I'd assume the factory screwed up. 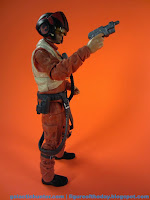 While the head sculpt is a little blah - the translucent skin, the old eyes and scruff  - the rest of the figure is pretty good.  Leave the exquisitely decorated helmet on his head, and odds are you won't mind that his lips were painted after the scruff was applied.  It just needs work - better paint masks or perhaps more skill in applying them.      Sculpting is similar to the smaller figure, only with more detail.  We've now got straps, hoses, a chest computer, and some of the worst shoes I've ever seen.  Functionally, they're great - I mean, rocker ankles!  That's good, right?  It should be, but the way the pants were cut and shoes were sculpted, while logical and functional, looks wonky.  You'll look at his lower legs and say "Hey, is that a ring like in the shoulders of my smaller figures?  Can the foot move there?"   Yes it can - and it doesn't look very good once you notice it.   You get around 20 points of articulation, which goes up to 22 with the bend-and-swivel ungloved hands.  That's right - not only did Hasbro include swappable mitts, but the flesh ones have extra joints.  It's a nice bonus! 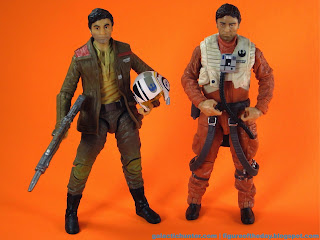 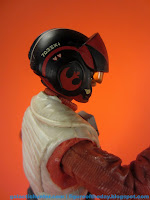 As pilots go, Hasbro mostly upped their game here.  The grit on the vest looks wonderfully disgusting, and the suit feels like we're seeing some real wear and tear in spots.  The fake cloth detail in the orange plastic is really amazingly done, and while there are some areas that look like they might be underdetailed - some spots on the left shoulder, some bits on the belt and straps - we haven't seen many final shots from all sides yet, so we don't know.   As "Action Figure Guy" this is a pretty satisfying release - if I didn't know this was supposed to look like an actual guy, it'd just be a neato futuristic X-Wing pilot.  As it is, it's just OK.  I love the helmet and articulation.  I don't love the likeness, or rather,  how the likeness turned out in the materials used by the factory.  Maybe it looked awesome as a 3D sculpt on a PC screen, but in my hand I'm just not feeling it.