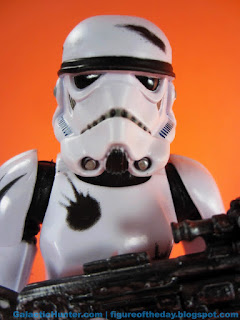 Bio: Under the tyrannical rule of the Empire, Stormtrooper legions ruthlessly crushed resistance across the galaxy.   (Taken from the figure's packaging.) 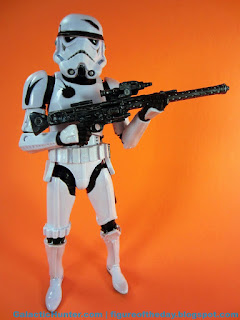 Commentary:  If there's one thing I know, it's that collectors are generally fine buying new Stormtrooper figures if they're a little bit different.  This battle-damaged version certainly is different.   The figure takes the same basic 2013 build, and changes up the deco in a meaningful way.   Comparing this one to The Force Awakens' new trooper, you can see that this line may have peaked early - not to knock the new trooper, but double-jointed elbow joints do wonders to give this figure a lot of extra personality.  The double-jointed knees, rocker ankles, and double-jointed head add to the punch.  It's good, you'll probably like it if you don't already have a Stormtrooper or Luke or Han in the disguises.

The main changes on this trooper are: silver gunmetal weapons rather than black.   The grenade on the back of his belt now lacks some grey paint from the original.   1 slash was added to the helmet, a blast was added to the right shoulder, a blast and a scrape were added to the right thigh, and the chest now has two big blaster marks.   The quality is just a little fuzzier, but it's basically the same as the earlier Stormtrooper.   If you need more (and you probably do), this is a nice one to have - but the blast marks aren't totally convincing.  I suppose you could wipe one of them off, because I can't imagine a trooper needs to get shot four or more times to go down.  This guy got his butt handed to him.   I suppose it looks acceptable, but at first glance I wasn't sure if I was looking at damage or some new rank marks in the thumbnails.

A Stormtrooper is essential to any collection.  Not necessarily this trooper, but a trooper.   My shelf has a growing number of these guys so I'm unsure if I'd buy extras if I had the chance, but I'm certainly happy to have the one and you may be too.    The smaller blaster fits in the holster just fine, and the guns fit the hands - no surprises there.  For a redeco boxed set, it hits all the right marks.  It's new, it's different, there's no duplication of things you wanted, but they may not be different enough to make you happy.  At least it's more troopers, and not Han with new pants.