Star Wars Figure of the Day: Day 2,228: The Inquisitor (Rebels, The Force Awakens) 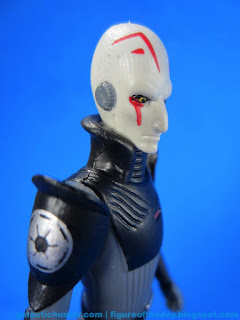 Bio: A servant of Darth Vader and the Empire, the Inquisitor was tasked with hunting down and eliminating Jedi who survived Order 66. (Taken from the figure's packaging.) 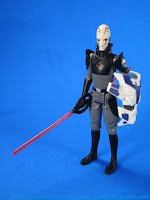 Commentary:  A new accessory!  The Inquisitor has been released a couple of times - there's an individually carded release (with face deco and package variants), plus a version sold at Target with the Inquisitor's TIE Fighter vehicle.  (A fine toy ship if you don't yet have one.)   For all intents and purposes, you've got this figure - but you don't have his funky purple and white shield accessory.  I personally don't feel your collection is missing anything if you skip it (particularly if you haven't collected the other 2,000+ figures and variants) but that's up to you.  If you don't have any Inquisitor toys yet, this one is just as good as the others. 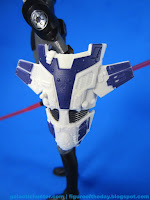 The character itself has been in rotation as an action figure for roughly a year, and is one of few Rebels characters that Hasbro kept available along with the Stormtrooper, Kanan, and Ezra.  They were packed pretty nicely and reshipped in subsequent waves - they're also popular and sell, so this is why you're able to buy him again.   He has the same 5 points of articulation, the same hands which can grip the same double-sided lightsaber, and the same pretty fantastic deco.  The design certainly makes for a nice figure, and I could only spot two changes that may make the figure itself worth grabbing again (depending on which releases you bought before).  The very first Inquisitors last year had short red marks descending from his eyes - these were elongated in subsequent releases.  Most of them are longer like this figure, so you probably bought this version if you didn't get him along with Chopper or a vehicle early on.    The other difference is his date stamp - the earlier releases were in white paint and started with a 4, to indicate the year 2015.  Mine is in a darker grey color, and starts with a 5 indicating 2015 production.

The other key difference is the added shield.  He can hold it just fine, and it doesn't quite fit his character.  I'm guessing it's going to be built and left in the "Combine" drone it builds, or it's going in an accessory drawer and forgotten.  I'm still glad this figure got another run, because for a time in 2014 he was quite expensive - the 31-inch figure was the same price or cheaper.  People just love the small format.   I like this one enough to say to snag it if you don't have an Inquisitor figure, but otherwise skip it unless you have to have his drone accessory part.  And I know if you're like me, you probably do.