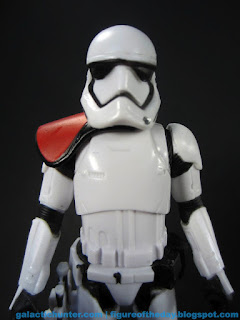 Bio: These mobile assault walkers operate as mechanized calvary units, storming enemy positions and running down fleeting troops. (Taken from the figure's packaging.  It's the same as the Jungle version.) 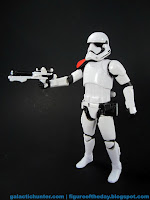 Commentary:  One good Stormtrooper Officer deserves another!   A Stormtooper with an orange/red shoulder pad is right up my alley, because I'm one of those old farts that remembers in the early 1990s when customizers' Sandtroopers were just vintage Kenner Stormtroopers with a pauldron and no backpack or other changes.  (It's also one of the first times we've had an exclusive at work where we had no reference material and didn't see the movie/read the comic.  Exciting!)

It's charmingly retro, and a red pauldron is cooler than a black one if you ask me.   Other than that?  It's a slightly different figure - perhaps a different rank, I don't know what role pauldrons play in the First Order if any yet - and I like it more than the Jungle version of the vehicle, too.  After all, I live in the desert. 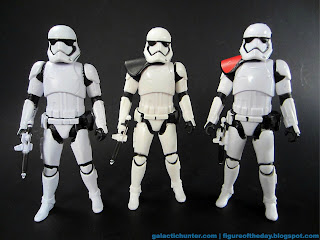 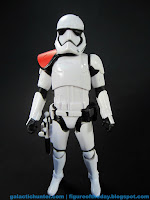 The Stormtrooper Officer figure is a tiny bit whiter than the Jungle mass-release black pauldron version, and the gun is fundamentally the same.  The paint masks for the black body glove deco are also similar to the Jungle trooper, which is to say they're a bit softer than the single-carded Stormtroopers.  If you got the Jungle version, this Stormtrooper is a lot like it.   It just feels more, I don't know, cheerful.  Fresher.  Expensive-r. 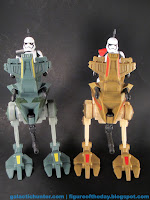 The vehicle - since we're here, let's talk about the vehicle - is also similar.  It's not a straight-up color swap, numerous changes were made other than "green" and "brown."   The Desert version has added markings under the "eye" guns, a different camo pattern, and extra camo on the body of the vehicle above the legs.  The legs also  have added paint on them, with extra elements decorated.  However, the Jungle version has some cool yellow markings under the legs and there's no analog present on the desert version.   As to declaring a winner, I'd say either is exactly as much fun but it's far easier for me to spot details in the Desert version.  The "screens" behind the controls pop a little more thanks to the brighter plastic colors, and if you're like me you're just going to buy them both.   I give a slight edge to the Desert version, but it has the same articulated ankles, hips, and chin gun as the Jungle version.  Get what you like, either one is enjoyable.   I'm more of a "both" kind of person, though.  I wonder if we'll get a snow one?  I assume we won't get a space one. 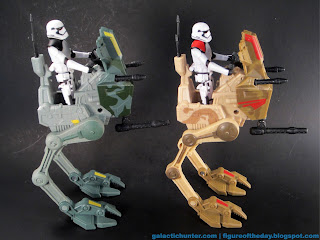 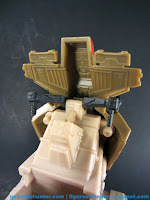 You know I like it - but if the numbers don't add up for you I can't blame you for skipping it.  For me, it works.  But I've got a shelf full of slightly different TIE Fighters and I just adore this kind of weirdness.  The Desert TIE Fighter went from "That's dumb!" to "That's awesome!" when I got it in my hands.  I won't say I'm the most discriminating person when it comes to the right kinds of weirdness, and I think this one qualifies.  If you like what you see, I think you'll like it.  If you wanted a Death Star instead, well, let's all cross our fingers for the next movie.

Collector's Notes: I got mine from Entertainment Earth.  Full disclosure - I work there and this is our exclusive.