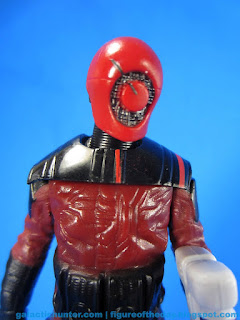 Bio: The security soldiers of the Guavian Gang wear high impact armor that makes them stand out against other deadly criminals. (Taken from the figure's packaging.) 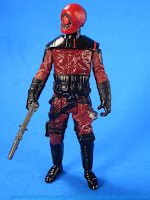 Commentary:  Solid.  The Guavian Enforcer is probably another trooper, but I was immediately taken by the lightly-armored figure and its head - which is, let's be honest here, clearly the Target logo.   You couldn't ask for better product placement, or a worse thing to have on your face if your job includes being shot at.   The 3 3/4-inch figure is very similar to the 6-inch figure, minus one of the weapons... and some height, and some deco, and some articulation.  But other than that?  Very similar.   It's worth noting the name - "Guavian Enforcer" - isn't quite the full name.  Resources indicate this is a truncated title and the full name is "Guavian Death Gang Enforcers."   The word "death" has had some issues in this line, dating all the way back to the original "Death Squad Commander" figure from 1978.  Of course if it's related to employment on the "Death Star," it seems to be just fine.  Strange, isn't it? 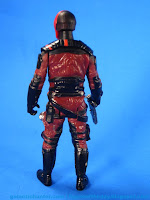 Anyway, Sgt. Killer Death Machine here wears a red suit with black armor.  The round dot in his helmet is unique, but not unprecedented - it vaguely recalls Ninja from Metal Gear Solid, a shining gem of the 1990s video game landscape.  This configuration and dubiously suspicious coloring makes me think of a major retailer I frequent, and their logo on toys is similarly not without precedent - check out Transformers Dark of the Moon Leadfoot toys.  That's more NASCAR than nuance, and much like the idea of someone named "Ren" it speaks to a potentially bizarrely silent faction inside the current Lucasfilm camp who seems to not see the "Ren? Where's Stimpy?" jokes in Mad Magazine coming a mile away. 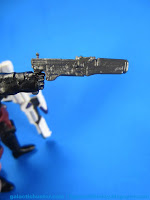 The figure itself, though, is great.  Shoulder armor is nicely Vader-ish - and I hope this is an intentional character choice - with a gritty suit and nicely articulated arms and legs.  They just swivel, with a ball-jointed neck.  There's nothing "new" here, but the design itself is striking and the bands on his leg boots remind me a lot of Vader's gloves from the original Star Wars movie. (They're different, if you didn't notice.)  The hands can easily hold his guns, he has no problems standing, and in my spot-check test for vehicles he passed with flying colors.  They did a good job here, or so I assume because we haven't seen shots of the costume from the set.  The figure looks decent, he matches his packaging just fine, but I suppose the actual "good" rating is tough to nail down without, you know, seeing the movie.   It looks like a figure that would make a great bodyguard for a Hutt, or someone else, so I'm digging it. Here's hoping the movie doesn't alter my perception of what he/she/they is/are. 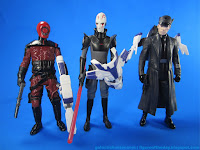 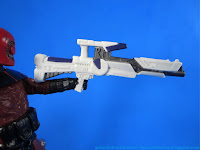 His "Combine" weapon is actually pretty swell - it looks like a Nerf blaster with white and purple.   It can be held in his hand without much of a fight, and doesn't throw the figure off too much.  It has a flat faux scope which acts as a base for the combined mode of the weapon, which I can best describe as a drone fish of death.  The gun serves as a tail, a jetpack from Hux serves as the fins and body, and the shield from the Inquisitor works as a more or less completely optional chunk of armor.  It's very OK.  It's a decent gizmo and one of the better concepts from this mostly ill-received (or ignored) gimmick, and it's also not very Star Wars-y. 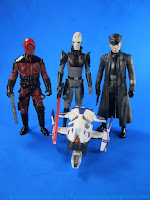 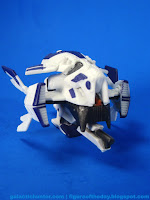 I really dig this figure - you should get it. The weird gun is fun, the figure is fun, and the standard blaster is awesome too.   If you hate the design or unintentional product placement, give this one a miss.  If you enjoy the weirdness that is modern space fantasy and shopping, get this one.