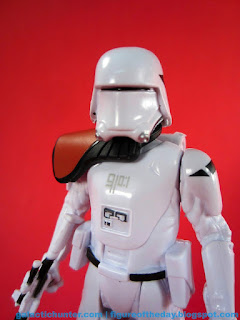 Bio: The First Order deploys these fast, maneuverable gunboats for combat in subzero climates.  (Taken from the figure's packaging.) 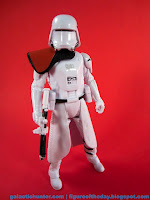 Commentary:  The new figure train apparently never ends, as  now we look at the First Order Snowtrooper Officer.   At first glance, I thought it was the regular Snowtrooper with a new shoulder pad - this is not the case.  There are actually a few notable deco changes that don't require a magnifying glass to see, so that may make things slightly more interesting for those collecting them all.  It's still the same basic sculpt, you will find difference between the figures that indicate Hasbro has produced at least two distinct full molds to make these figures, thus irritating fans like me because they could probably have put those manufacturing resources in making a figure that's actually different instead of mildly different.

First up, the sculpt - everything is basically in the same place, but there are differences.  The copyright markings are on the feet of the single Snowtrooper, while the Officer's soles are clean.  The officer's backpack details are a little crisper, and his chest tool is different.  A pair of dimples on the officer are rather small, while they're larger and run longer on the regular carded trooper.     The officer also has more cloth folds and wrinkles than his enlisted counterpart.   Also, the added pauldron creates the most obvious change to the figure's appearance, and is arguably the reason you're going to want this one if not the speeder itself - more on that in a bit. 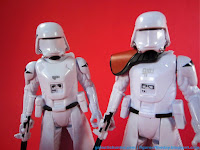 Our new Stormtrooper Officer's deco is pretty similar to the trooper, but you'll notice significant changes on his chest.  Buttons which were painted solid black on the single trooper are hollowed out on the officer, and the chest armor markings - perhaps lettering - is larger, and placed higher on the chest. 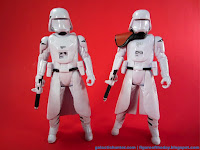 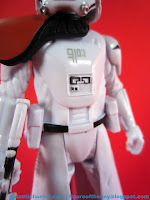 Now as to the vehicle itself, this is actually kind of interesting.  I was all set to write "this seems expensive for what you get" citing the $20 A-Wing from 1997 as an example.  That had a pack-in figure, but adjusted for inflation it would be $29.70 today.  With that in mind, it's actually priced about right - it just doesn't do much.   A removable rocket launcher and a kickstand are the only features on this vehicle, so there's no on-board weapon storage or opening panels or secret rumble seats or anything.  What you see on the box is what you get, and while I basically dig the vehicle I just wish it did more.  Gun storage behind the seats would have done wonders, but the figures have no problems sitting or standing to man the launcher.  Unlike some other vehicle/figure combos, these fit like a glove and the plastic feels more like most modern plastic vehicles - anyone tells you that it feels cheap is lying.  It's not as fun as the A-Wing in terms of levers and switches, but you get a decent figure and a decent vehicle for a price that is, for good or ill, priced right for inflation.

Collector's Notes: I got mine from Entertainment Earth.  A 6-inch version of this figure will be at Toys R Us as an exclusive if it hasn't already showed up.