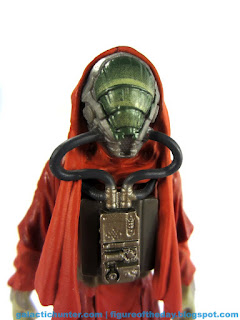 Bio: A scavenger and trader who scours frontier worlds for riches, Sarco Plank must wear a specialized mask that keeps his native atmosphere circulating through his alien lungs. (Taken from the figure's packaging.) 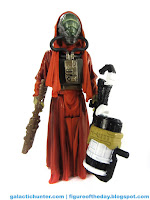 Commentary:  I was considering waiting to write up Sarco Plank until I knew more about it, but then I found out he was included in a recent novel to menace Luke Skywalker.  With that in mind, I'm assuming that - like the Ephant Mon/Ki-Adi-Mundi thing in the comics - it's pretty likely that Sarco Plank won't be doing much of anything in the new movie beyond showing up and saying hello.  So I'm assuming we won't be seeing him do all that much, but really, I have no reason to assume this beyond the book connection.   It's a pretty neat figure! 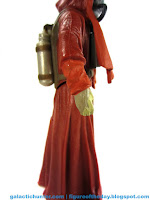 One of the things about character design in the prequels I didn't care for was more gowns and less pants.   This continues that trend.   Sure, the figure's legs are sliced up so his legs can move but chunky gown legs do impose limitations on movement, regardless of how you joint the legs.  The arms move fine, the neck is more or less stuck thanks to the design of the hood, and the legs swing forward but not enough to fit in most vehicles.   They did a decent job there, but the sculpting is really, genuinely something.   The exposed green skin and hair feels truly alien - even for Star Wars, you don't see a lot of green hairy guys.

The face mask looks like a bug, with wonderfully intricate tampos giving it a weird, presumably reflective, form of light.  His cloak is insane - there's a great fabric pattern but also really nifty stitching, with an obvious change of texture about ankle-high on the figure.  What's more, if you look between his legs - and really, who wouldn't? - there's even more to see there.  The nutty people at Hasbro actually painted the interior of his pants, a detail you will never see unless you have one leg kicked out and the other one left alone.  Separately designed breathing gear is integrated to the head and as a backpack, which just adds to the weirdly alien look that - amazingly - continues this line's tradition of covering up most alien faces.   It's amazing how they really turned the whole creature design aspect of so many characters on its head by just not showing them to you. 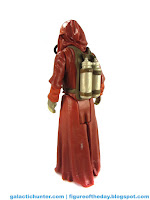 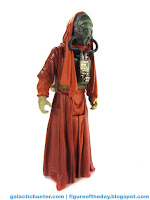 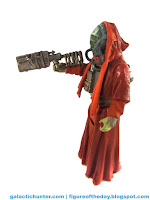 As weapons go, he has a wrapped-up cobbled-together blaster by default which fits in his hands and works just fine.  There's no paint, and I assume it's accurate to the movie.  Minus the whole paint thing, at least.  It fits, it works.

It is joined by a "Combine Weapon" blaster which is similarly proportioned, but much larger.  It's silly, and you can plug it in to Ezra's mortar weapon and Kanan's Portal gun to make an incomprehensible and utterly worthless piece of hardware.  As a gun, it's decent - just big.   As these weapons go it's pretty nice, and only mildly ridiculous.  Sarco Plank can even hold it - a rarity for these things, so that's a plus. 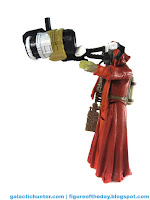 I like this figure because it's really bizarre.   One of the great things about the original Star Wars was how we were treated to exotic forms of life with no backstory - they were just there.  Over the years, that got eaten away.  It's likely Sarco Plank will get more of an origin, and maybe we'll see him unmasked.  I hope not.  I really like the idea that there are some strange worlds inhospitable to humans with weirdly colored beings who, even in their presence, we may never really truly see.   I've got a lot of weird toys, and this one really does strike me as odd.  Get it if you can.

If you look at the images from the Empire magazine article (from May) you will see Sarco Plank hanging out with guys that kind of look like Unkar thug.