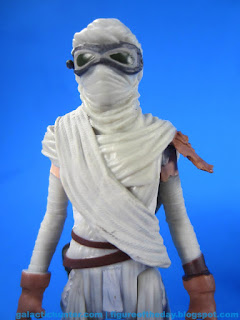 Bio: For quick transportation across the junk-strewn dunes of Jakku, Rey relies on her old salvaged speeder. (Taken from the figure's packaging.) 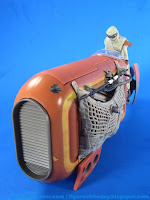 Commentary:  One of the most surprising thing about the new line of Star Wars is how figures look similar but are, in fact, different. Rey launched with two 3 3/4-inch figures - a carded one, and this pack-in speeder pilot.   At first glance one looks like a new head on the same body - but that isn't the case.  The 5-jointed figure has a new head with a new chest covering to give the illusion of a new torso sculpt.  When you drill down, you'll notice changes to the actual torso sculpt - compare the crotch zone on the two figures.  There's more of a flat, undetailed area on the bottom of the ship pack-in.  But that's not all! 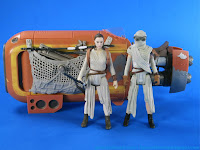 Her arms are changed - new gloves are added to the sculpt.  Her boots are a much darker color, and the bottoms of the pack-in figure's boots lack copyright markings.   In other words, the figures look like they share parts but really do not - each element has been altered in some way, so the near-identical sculpts seem really odd.  Why not change the position of her pant legs, or tweak some other textures a bit?   If that weren't enough, the colors are all different - the skin tone is a bit more peachy, the outfit is a bit less red/pink in a side-by-side comparison.   Compared to some of the other pilot figures, the number of changes are quite profound but the fact that they're all so minor is almost annoying.  Why not go the extra mile and change her pose?   Perhaps it's to ensure the figures can both fit on the speeder fairly well - perhaps not. 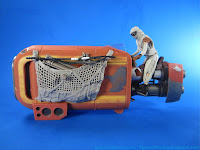 Hasbro's wisdom in selling you multiple figures shines through in the figure's head - specifically, you can't see her face.  Wrapped in more goggles and strips of cloth than a Tusken Raider, there's zero evidence of who is underneath the "helmet."   If you buy the vehicle, you'll probably still want to buy another Rey so you can see her face.  If you buy the figure,  you'll probably want the speeder.  No matter what, Hasbro has now succeeded in getting you to spend close to $35 if not more - clever!   It's different enough to be interesting, as a new head, new deco, and new elements are usually enough to warrant the purchase of a new figure.  The vehicle is, of course, a nice bonus - even if it really is just a Landspeeder rotated 90 degrees with a couple of tweaks in the back section.