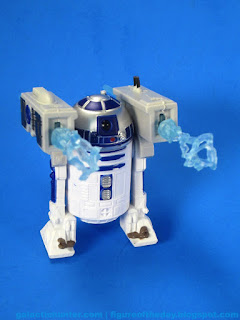 Bio: A loyal and dependable astromech droid well equipped for starship repair and computer interface, even after decades of service R2-D2 continues to be full of surprises. (Taken from the figure's packaging.) 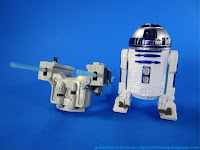 Commentary:  To me, it's not a Star Wars line unless it has R2-D2 in it - so the 2-packs not being out at launch (and being hard to get) colors my view of the new line as almost something of an impostor.   Thankfully he's here, and he's also been in Rebels near the beginning and in nearly every movie line over the last couple of decades.  You can put a guy in thrift store rags and blacked-out goggles and it's Star Wars-ish, but it's difficult to come up with an all-new design that immediately feels like Star Wars.  This is why you rerelease and repainted R2-D2 - and unsurprisingly, this one is both of those things but with a notable and great bonus accessory. 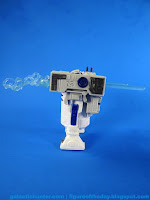 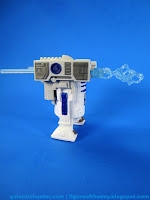 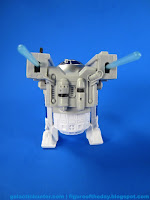 If you bought the Mission Series 2-pack with R2-D2 from 2013, you know what to expect - the shade of blue is different, and the date stamp has been updated to a more elegant printed (rather than carved) model, but it's fundamentally the same exact figure.  All three points of articulation have been preserved and the sculpt is still clean (and bare white on the back) as before.   The bald spot - the silver cap on his head instead of blue - is also there, so Hasbro neglected to make this correction with this release.  Perhaps I should complain more loudly next time.   Its a good representation of the character and should be enough to delight the kids - given the lower price of this mold, I hope they use it for future exclusive repaint opportunities.  I'd rather pay $7-$8 for a droid over $13.

What really makes this set sizzle is the utterly preposterous droid harness.  It's great.  I don't know that it's worth a $5 mark-up over the previous accessory-free set of R2-D2 and C-3PO, but I'll be honest - I'd have paid it.  It's not particularly securely assembled.  Each rocket is a 2-piece item, as the "energy bolts" are a rubbery cap that goes over the head of the rocket.  (Please save your giggles.)   The color matches nicely.   The harness itself is three pieces.  Each launcher is separated from the connective piece on his back which reminds me a bit of a jet pack.  It doesn't hold together perfectly, but it looks like a goofy 1980s mini-rig kind of a thing.   It fits perfectly, and it's nicely decorated - dark grey and blue bits give it a little more life.  Even more paint would be great as the details on the harness beg for some more color.   Normally I'm not a big fan of adding spring-loaded anything where it doesn't make sense, but this delivers on the promise of the undelivered 1996 "Attack R2-D2" figure we saw in a Kenner catalog as a line item.   It's also optional, so it's not entirely implausible to think that, at some point, R2-D2 had to pop a cap in someone's backside. 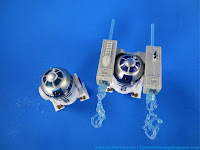 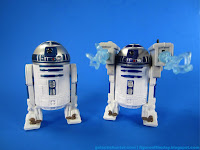 I really love this set - even though I own all the dang R2-D2 and C-3PO figures, it offers something new for both.  A new red arm for C-3PO and rocket launchers for R2-D2 changes up how we perceive these characters, and it makes it fun too.   If you have the means, get yourself this set.  If Hasbro never single-cards C-3PO, you are required by space law to get it.  I'm loving it, I wish R2-D2's paint was a tiny bit better - specifically that silver dome cap - but other than that, it's a lot of dumb fun and a good toy twist on everybody's favorite pet Swiss army knife.