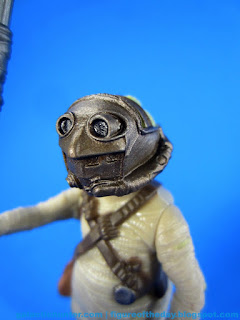 Bio: Teedo is a small, brutish scavenger that roams Jakku's vast wasteland on his semi-mechanical Luggabeast. (Taken from the figure's packaging.) 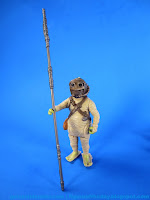 Commentary:  He has a name!  And apparently, a Luggabeast.  Teedo's derivative name is better than the on-box Jakku Scavenger, which bears a TM while Teedo does not.  Curious!  This is a good set, with some bad gear.  Teedo makes for a nice figure, but his accessory is one of my least favorite in the line.  And I hate a lot of the accessories in this line. 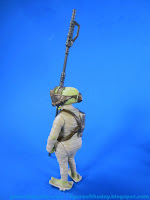 This little guy is most likely a new species.   Like his companion thug, his face is covered so we don't get a good look at him - this has the added bonus of making him appear more menacing (see also: Jason Voorhees, Tusken Raiders) while employing a great cheat of making the movies look more real.   Subtlety and nuance are often lost as budgets increase, movie makers are more concerned with overly realistic designs and showing them off - here, at least so far, it looks like we're seeing a more conservative approach to alien design by considering the environment and pulling back.

By not showing the face, it's left to your imagination - we see some green reptilian skin on the back of his head, but we have no idea if he looks cute, goofy, or terrifying yet.   We may never see his face on-screen, like with the Jawas and Tusken Raiders.  (I am assuming this is an intentional nod.)   Mystery is good, but licensing partners want to show and tell us everything - it's a bad idea.  Not showing us Boba Fett's true face from 1979 through 2002 paid great dividends for the character, and it's possible the approach could work here too.  The little green guy is wrapped in beige cloth (shades of the Tuskens) and sports bandoliers crossed on his chest (see also, Jawas).  The mask is unique, with "snowshoes" for the desert and little bits of gear dangling off his costume.   While a simplistic design compared to the preposterously ornate gowns and suits of the prequels, it feels like it would be right at home in Jabba's Palace or a Cantina.  Were he to show up in a comic, you'd assume he belonged there.  He's Star Wars-y.  He also doesn't feel cheap despite being short and one of three figures in a great $15 set. 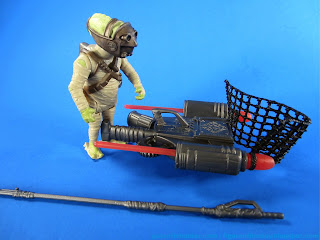 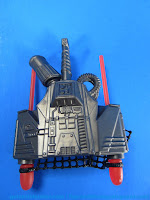 I like the pole accessory.  I love the figure.  I hate the big accessory.  He comes with a spring-loaded rocket launcher with nets on it, and if you're old you may recall similar accessories in other lines.  The designs are tough to execute, and generally don't play well - trying to catch an enemy in a spring-loaded net is tough, and that's when they're designed sensibly.  (Scavage Predator had a bola that worked quite well, though.)  This launcher is far too big for the figure to hold, and requires  you to deploy two flick rockets simultaneously in order for it to fly.   Needless to say, this does not work well.   The gun is too big for a 6-inch figure, and some sort of pole or tripod to prop it up would be nice.  And so would a better launching mechanism.   And a cloth net, rather than this fragile-looking plastic one.

For all I know the weapon integrates with an as-of-yet unrevealed Luggabeast, or maybe it serves some other better purpose.  Right now, it's a cruddy gimmicky thing that doesn't work well and prevents me from netting BB-8 like the photos suggest - an actual small cloth net I could drop on him would be more effective.   It's not fun, and it doesn't work well.   So - the figure is good, the accessory is not.  I still strongly suggest buying the figure, just be prepared for a weapon that should make children cry.

This figure looks as exiting as the Tusken Child accessory that came with the Tusken Raider Female figure from Attack of the Clones.