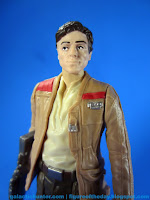 Commentary:  Because this figure is (to date) exclusive to this set, Poe Dameron is currently worthwhile - his sculpt debuted in this set, and if there's a single-carded version of it at a lower price I've not seen it yet.   At first glance it's the same costume Finn wears, but it's actually just very similar.   The jacket is of a similar cut, but the pants, shoes, and shirt aren't.  The head isn't either, but that's a bit more obvious.   The same red stripe is present on the jacket, but the sculpt lacks backpack holes.  The armor makes up for this oversight.  His head sculpt doesn't exactly look like Oscar Isaac - maybe it's the eyes, maybe it's the hair color - because at first glance I was wondering if it was a (not very good) Star Wars Rebels Cadet Han Solo or something.   Maybe I'll feel differently after I see the movie but this figure doesn't feel particularly specific in its current format.   There is some nice detail here, but a good likeness is exceedingly important - slightly darker hair would be one way to give this figure a smidgen more authenticity at minimal cost.   The outfit is, I suppose, a good one - having not seen the movie all I can say is that the work put into this figure shows.  5 joints, winkly pants around the boots, and a shirt that shows some signs of action makes it a decent figure.   I also appreciate the rank badge and numerous decorative pockets. 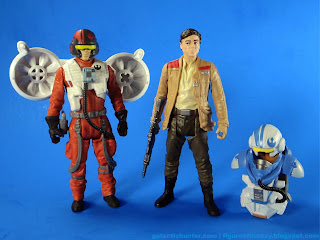 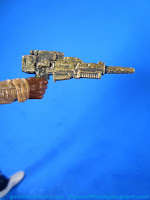 He can stand and sit, plus his jacket doesn't get in the way of sitting - his hip joints do restrict the movement a bit, though.   His hands have no problems gripping his ample blaster rifle which is cast in gunmetal plastic and doesn't have the patina or deco of some other weapons but it is - so far - a unique sculpt.   I can't say it looks bad, but I can't say it looks good either - so far I haven't a thing to complain about here. 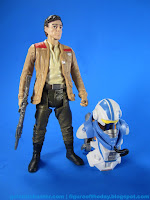 Also diggable, the armor!  It's pretty slick - it could be cooler, but it's fantastic.   The fact that the helmet can't be removed and worn separately is my only complaint.  They did a fine job integrating a very Star Wars-y helmet with blue markings, armor, breathing gear, and a jet pack.  A jet pack!  That's something we usually only get in the Kenner and Hasbro Star Wars universe, unless you are a Fett or a clone of Fett.   The Rebels and Imperials rarely get this kind of gear outside video games, so the clip-on armor deserves a round of applause for integrating components to resemble the classic pilot helmets and chest computers.  I like it as a stand-alone toy, and I suppose I have to because there's probably zero chance of any figure fitting in an X-Wing while wearing this gear.  Unless of course Hasbro makes a new bigger X-Wing, and I of course am hopeful this might happen.   As a survival item or something you might wear after hitting the "eject" button in a planetary atmosphere, it's pretty slick. 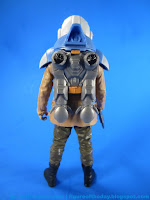 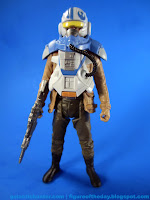 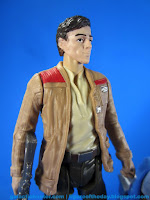 Given the price - $13 for this, or probably $40-$50ish to get a 6-inch Black Series one in a 2-pack (if that comes out here) - this is a rotten deal.   Dollars do not support this purchase, but this item is likely being sold to kids, gift-givers, and those who appreciate the truly weird toys.  There's no reason this shouldn't be $8, or simplified to meet that price point - and at that price it's awesome.  It's just no bit of snap-on armor makes a figure twice as awesome.  Heck, those of you old enough to remember the 2004 "Ultra" figures may recall a $5 C-3PO or a $10 C-3PO with a full Escape Pod.   I'm all for higher price points, but I'd like to see something to show for it like a mini vehicle or additional accessories.  This is moot, though, because as of right now if you want this character in this outfit you don't have options.

I don't know if my figure was not properly assembled, but the helmet was easily removable from my armor. It was just sort of pegged into a slot at the top of the backpack, and was only held there by pressure and friction. https://www.flickr.com/photos/skeletonastronaut/21887947215/