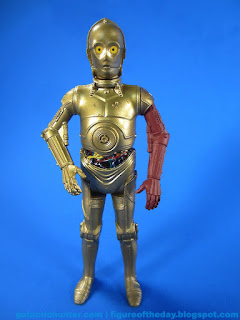 Bio: A fastidious and worry prone protocol droid, C-3PO longs for more peaceful times, but his continued service to Princess Leia keeps him in the frontlines of galactic conflict. (Taken from the figure's packaging.) 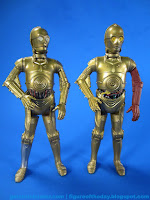 Commentary:  Expectations are hard to avoid, and are easy to subvert.  I assumed C-3PO was the 2013 figure with a red arm.  Nope!   There's new tooling here.   The legs are slightly narrower, with a new 2015 copyright mark.  The torso is new - the wires on his belly are totally different.  The circles on his chest are also quite different, finer and more compact.  Details around the neck and robo-nipples also seem to be sharper and in more focus.   The arms seem very similar, as does the head.  For a "repaint," there's some surprising work done here. 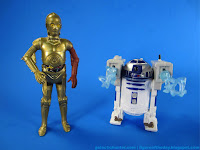 Deco is, of course, more obvious.  C-3PO's (largely underrepresented) silver leg is gone - this seems to be consistent with other The Force Awakenes products so far including a life-size cardboard stand-up.  The right arm is now red, similar to R-3PO - this is the most obvious and glaring change on the toy.   A subtler change are his eyes, now with black dots on a yellow eye.  It looks better than the white eyes of the previous release.  Paint masks seem more cleanly applied and the overall look is a better, sharper, and I hope more authentic figure.  For those of you joining us in the distant future, information on the new movie is limited and its release is nearly two months away - so from what little we know, this seems to be a fairly authentic figure. I assume a comic will explain the red arm.  Or perhaps it's a nod to Attack of the Clones.

What matters - I dig it.  The silver leg is gone, but hey, red arm. That's visibly new.  I look forward to seeing a shiny version down the road.