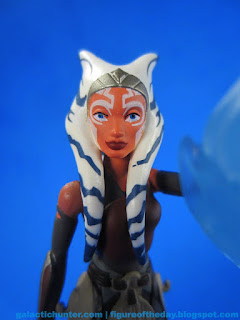 Bio: Anakin Skywalker's apprentice Ahsoka Tano left the Jedi Order before it was destroyed during the Great Jedi Purge, but the truth of her fate remains unknown. (Taken from the figure's packaging.) 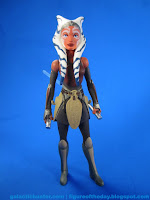 Commentary:  Isn't it funny what a difference a few years makes?  In 2008 the character of Ahsoka Tano was sort of a whiny kid sister assigned to challenge Anakin Skywalker and who was unfortunately assigned dialogue with awkward nicknames for someone  who fans already had wavering amounts of respect for in the first place.   She proved herself on the show and quickly became a hit with fans, especially the younger ones.  Those fans grew up and now seven years after her debut we found out she's been retroactively named as one of the founders of the Rebellion - which makes a lot of sense.   We probably missed her 20s, and my guess is here she's 30ish. 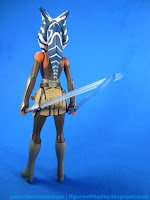 Warning/guarantee: Ahsoka was not designed with the kind of squared-off legs you may be used to thanks to her unique costume - a bit of armor hangs over her waist and down over her legs.  On my sample, it was "glued" with paint and made a terrible tearing sound when I tried moving her legs forward.  Everything is fine, but you may wish to be careful in case yours does rip.   It's flexible plastic, but since it's held by a small strip of plastic it pays to be concerned. 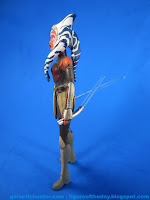 Her costume looks a lot like what I assume she would have worn during the Clone Wars - the toy is missing the wrist communicator, but the armor looks like a mutation of what the various Jedi generals wore, and the coloring looks similar to what she was fond of wearing on the show.  Her flesh-hair has grown in, and the figure itself looks a lot like the animation model - a little paint slop, but generally quite good.   There's a lot of color, and the only thing that really irks me here are her hips.  Like Vader, each leg has a "hook" that serves no purpose - her lightsabers can't hang there and there are no hilts included.  They're just something of an eyesore.   It's also worth noting my sample has difficulty standing - if she's holding her lightsabers with her blades facing behind her, the weight may keep her upright briefly but she almost always teeters forward.  If you have display stands, she's a figure that will make good use of them. 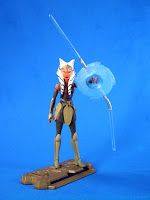 Speaking of accessories, they're not bad.  She has a blue energy blast with a handle that spins, complete with lightsaber slots.  It's similar to The Clone Wars Darth Maul's, but a different sculpt.  The energy and lightsaber blades are a bluish hue, which more or less matches up with the show's almost-white.   Each hilt is unique, but doesn't quite match the ornate (and most worthy of replicating at a larger scale) versions from the show.    One hilt is bent in a way that I assumed it was warped plastic, but that's just how decades of collecting has treated me to see bent plastic.  Even if intentional, it sometimes looks wrong.  Each blade also lacks the "flare" at the base - a feature on nearly every lightsaber since 2001.

Because of what this figure is - the only adult Ahsoka ever, the only Ahsoka in stores in 3 years, and also packed with a new Darth Vader - you'll want it.  Yeah, she can't stand.  Yeah, sitting's a problem.   But she comes with a new Vader and it's not like we're swimming in Rebels toys.   $15 ain't a killer for this set, even if the figures could have used a little more time cooking.   Get it anyway, unless a better one has been released.

Collector's Notes: I got mine from Entertainment Earth.   An Ahsoka/Anakin Mission Series 2-pack was long rumored and, hopefully, still possibly coming.