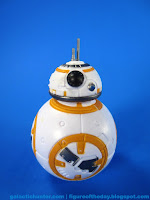 Bio: BB-8 is the spherical, loyal Astromech Droid of the Resistance pilot Poe Dameron. (Taken from the figure's packaging.)

Commentary:  Easily the most famous face of The Force Awakens' pre-marketing campaign, life-size BB-8 displays ensure this is to be the most popular toy in the line.   A pity it was late for the launch, and tough to get.  This set is a fantastic value, providing you a cleaned-up version of the orange and white droid whereas the Millennium Falcon has one with some wear and tear on it.   If Hasbro sold just BB-8 by himself for $8, it would sell - even though he doesn't do much, popularity counts for everything and the $80 and $150 RC toys are selling just fine.  With that in mind, why wouldn't you fork over $15 to get him and two weird masked aliens? 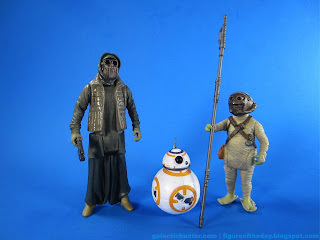 If you read my review of the Falcon pack-in BB-8 last week, this is really similar.  But here's the amazing thing - it's not the same sculpt at all.   (Or if it is, it's packed with changes.)  The head moves in the same way, they're roughly the same size, and more or less the same color.   But side-by-side, you'll see a ton of changes.  The footpeg hole on his base is moved.  The white is bright white on the 2-pack release, rather than off-white on the Falcon pack-in.   The antennae on the 2-pack version is much thinner and the eye isn't nearly as glossy.  Even some orange panels are painted a little differently, with some spots painted on one figure but not the other - it's amazing to me that Hasbro would make two different molds to make two different BB-8s right now, but perhaps that's a necessary part of ensuring there are enough in the supply chain to go around.  And of course, there aren't. 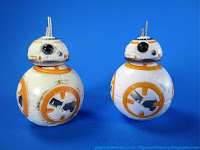 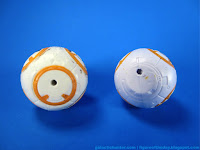 As you put the little guys next to each other, you'll notice changes in rivets, or vent placement, or panels, or other minor and relatively insignificant changes that will leave you wondering why Hasbro didn't just deploy one mold to two master tools.  Or if they did, then this is a fine example of how the toolmasters in China can execute the exact same design in a completely different way.  We've seen some of this on the various First Order Snowtroopers, Stormtroopers, and even the TIE Pilots already, but it's still a surprise here.   With only one moving part, neither is fundamentally "better" and just because of cost, I'd suggest you buy this cheaper version.  The Falcon pack-in has a big, glossy eye that looks a little more adorable but that's offset by his off-white finish.  I like the bright white one better.   I can't declare either superior, but if you don't plan on buying the expensive Millennium Falcon I bet you or your loved one will be very happy with this figure set - the scavenger and thug are nothing to sneeze at, either.  At $15, even just for BB-8, at least for now - I think you'll be happy.

the sculpt is not different