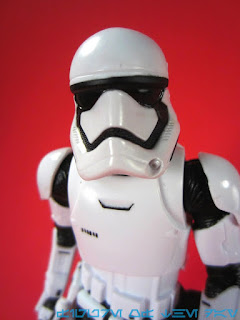 Bio: Shock troopers clad in white armor first appeared on the galactic stage during the opening battles of the Clone Wars.  Clone Trooper armor became iconic almost immediately, its stark white design stood for hope that peace and stability might be restored to a galaxy at war, but this dream of peace died with the Republic, and the Empire that rose to take its place imposed order by any means necessary.  Soldiers within the Grand Army of the Republic were given a new name: Stormtroopers.  As the former protectors of galactic peace mercilessly crushed resistance across the galaxy, their white armor came to symbolize oppression and the indomitable power of the Emperor's will.  Yet the tyranny of Imperial rule sparked rebellion, and the stormtrooper legions were scattered in the aftermath of the Empire's fall.  Now, the rise of the First Order ushers in the next chapter in the Stormtrooper's legacy as a new era of ruthless brutality begins.   (Taken from the figure's packaging.)

Availability: Get one at Comic-Con, or HasbroToyShop.com next week if you're lucky.

Commentary:  I was having a hard time with this one.  Obviously getting my hands on the new First Order Stormtrooper early is a cause for great celebration, because this is the "sneak preview" figure for the new movie.   Unless Hasbro has a surprise exclusive assortment that managed to be kept silent - and given the way things have been going, this wouldn't surprise me - here's your only new movie figure until September.   It is expected he will be rereleased with only packaging changes later, making this item most flippable if you're one of those terrible people.   If what you're looking for is glowing unlimited praise, I don't believe that I will give it to you - but I can say that this figure improves visually on his troop predecessors while losing a bit of mobility in the process.  The look is really beautiful and boxed collectors have a real winner on their hands here. The white plastic deco is so shiny and the silver and black paint details are mostly quite clean.  So much so, I daresay I'm taking it for granted. 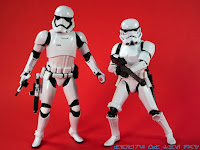 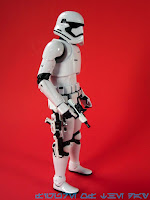 The box retains the bland line name from previous 6-inch releases, but the sleeve and die-cuts reveal some cool stuff.  An extended bio on the spine and a booklet seem to hint that someone may have meant for this to be a bigger set with more figures at one point, but we don't know that.   Everything fits together nicely and the package presentation is so good it's kind of a shame that Hasbro won't adopt it for the main line just yet.  Hiding a little product catalog in the book nook and keeping compartments for the accessories make it feel absolutely wonderful, and if presentation is everything than this figure is, indeed, everything. 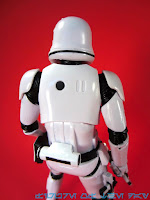 The reality is that presentation is a good start - the real question you're all asking is what new wonders does this figure have in store for you, right?   Here's a surprise - it's a lateral move.

Despite heavy advances in articulation with the start of this line in 2013, this figure rolls back a few of them.  Wrists turn, and the double-elbow joints we've come to enjoy on troopers have been replaced by a single ball-hinged elbow with limited movement.  Getting both hands on the gun is a little tricky because you don't get a 90-degree bend on the elbow - it's kind of unfortunate to see troopers, of all things, with less arm movement in a line that is (let's be honest) about collectors posing figures on shelves and never playing with them again.  You still get rocker ankles and double knees, though, plus a swell ball-jointed helmet and the wonderful mid-torso waist joint allows for many fun poses.  The lack of biceps may bother you, but so far the elbows seem to be mostly doing the trick for arm movement.  Except for the wonky elbows. 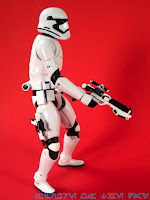 I should highlight that one area Hasbro improved this figure dramatically is in hiding the articulation.  I don't think this is going to be immediately obvious to anybody, but the various pins and pegs we've seen before are largely invisible.  There are no more white pins in the black body glove regions, and the elbow joints are all internal - so you lose movement, but you improve on looks.  I didn't even realize the wrists were bend-and-swivel at first - they managed to cram that part in the forearm, and it really can move in and out a tiny bit.   It's easy to lash out on the elbows - I just did, and will do so in the future - but everything else shows evidence of a lot more careful thought and planning than before.   The range of motion on most joints is very good, and the figure can even sit on a desk or a small chair with no problems.  Seeing how Hasbro usually handles articulation, I think that means they're giving more than a little thought to this mold's future reuse and potentially even more vehicles in this range. 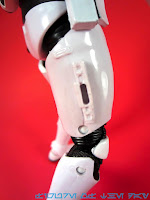 My favorite feature of the figure is his holster.  Rather than include a black pouch, there's a ridge on the right thigh that has a slot to plug in either of his two guns.  I love it - true to the movie or no, it's just so gosh darned handy to keep the figure with his weapons.   He can hold one gun, and store the other.  It's brilliant, and a nice piece of relatively simple toy engineering. 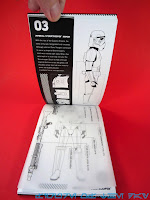 I haven't even gotten to the design yet.  Not being intimately familiar with the final full suit of armor yet myself, all I can say is I love it.   When I first saw the leaked helmet design, I was immediately taken with how it looked like it came from Star Wars' future as I might have envisioned it in 1987.   This would be right at home adjacent to early Lazer Tag toys, except it's far more interesting to see the changing mouth connect to the eyes with quasi-Alice Cooper streaks down the cheeks.  It's much smoother than other designs, with slightly bulkier ankles and various greebles that I assume serve some unknown purpose.  There are rods on his shins - why?   I have no idea.   His belt feels almost off-the-shelf with more visible black on the sides of pouches not unlike the case you use to carry your Nintendo 3DS. You know the one. 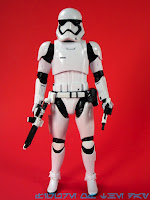 The back of the helmet is totally smooth except for a black stripe connecting to the front, which is somewhat unsettling.  The back of the armor is similarly smooth, with a black dot for the "OII" pattern we've known on our troopers since 1977 forming the focal point on a design that would have been at home in a 1989 Z Gallerie shop at your local mall.  (They had lots of black and white back then.)   It's really strange to see some of the design choices up close - fingers are black on the outside with white on the inside, and the guns have a ton of white on them.  I don't know if this is because of some military combat strategy, aesthetics, or because it makes the toys easier to make if they aren't black in the movies.  The design looks very similar to the original rifle, but the smaller pistol doesn't seem overtly Imperial.   Maybe it's very First Orderly, I don't know enough about their style yet.

I don't feel inspired to army-build but I do think I'd be happy to see other repaints or disguised characters in this armor if such things make sense as the story is concerned.

Collector's Notes: I got this one from Hunter PR. You will most likely get one from eBay, HasbroToyShop.com, or via barter for one of your kidneys. 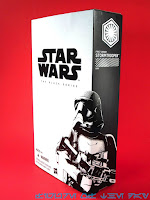 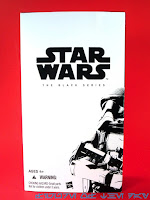 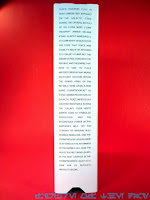 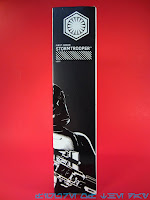 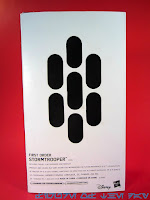 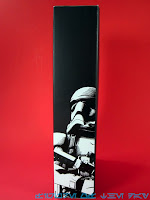 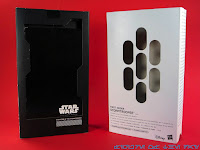 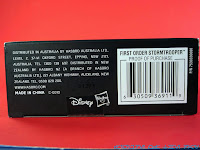 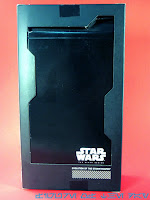 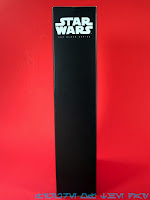 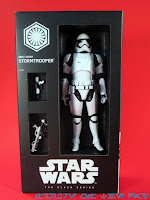 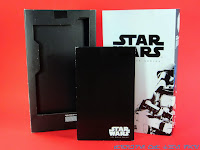 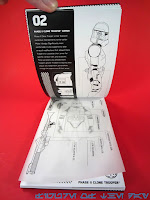 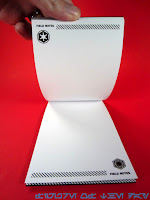 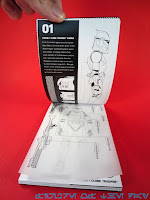 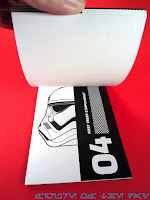 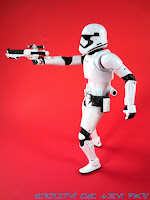 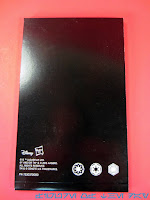 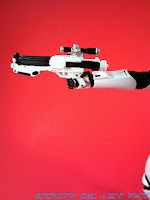 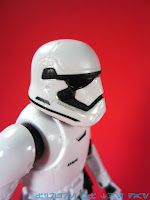