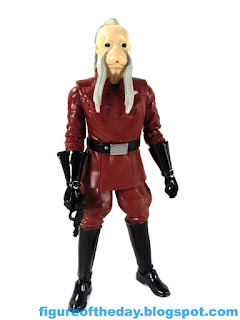 Commentary:  As we move along, the number of figures that are genuinely "missing" from the original films dwindles.   Remakes of other characters are like the cereal we have to eat before getting to the prizes that are the likes of Mosep Bineed  - the first new Cantina alien sculpt since Dr. Evazan's 2012 remake, and the first all-new Cantina alien since 2011.  Hasbro is being stingy with these now.   Mosep is recognizable to older fans for a variety of reasons. Maybe you saw him on a trading card, or as "Jabba the Hut" in the Marvel comics.  The mold lends itself to an awesome quick-and-easy repaint, should Hasbro decide to go in that direction.   (Fantastic Comic-Con exclusive, right there.  Throw in a blue-faced Takeel.)   Fans of the 1990s Expanded Universe may know him as Jabba's accountant, who retroactively stood in for the crime lord on certain occasions.  It's a goofy retcon, but that's how long-running franchises deal with continuity errors.

Hasbro nailed it.  This figure's pretty awesome, going above and beyond what a good Cantina Alien needs to be good.   Rocker ankles will amaze you on this 4-inch tall figure, while ball-jointed shoulders, elbows, and knees are more or less normal.  Swivel wrists and a swivel waist are joined by a swiveling neck, making this figure equal to or better than the last few Mos Eisley aliens - and certainly better than the ankle-free Ree-Yees.  My only real valid complaint about this figure is the Collector's Dilemma - is it more important to have a super-articulated figure with the "skirt" tunic piece which restricts hip movement and renders a figure unable to sit, or is it better to mar the sculpt a tiny bit to add some cut joints in there so the figure is a worthwhile toy?  You know my answer - I think the figure should be capable of sitting - but as the figure is capable of standing upright at a bar, I can't say it's a bad figure.   It would be nice to fit him in a vehicle, though.

Mosep's tiny blaster fits well in his hand, and his hands may pop off easily - such is a problem with the current construction of figures over the last few years.   Don't be surprised if they pop out - but when they do, take a moment to admire the sculpting.  The glossy black hands have buttons on the underside of the gloves, painted silver - you may never notice them.  A silver ring is painted on the front, and that should be as recognizable as the silver belt buckle with the little pip next to it - just like your Imperial Officer figures.  With a different torso, this body would make a fantastic basis for future Imperial Officers, provided you don't need them to sit.  The folds in his fabric outfit and the glossy boots are wonderful, and it's nice that Hasbro makes their remaining few aliens excellent as they get made.   A long, light grey mane of hair matches what may be the biggest mustache to ever grace a 3 3/4-inch action figure, and his tiny black eyes are expertly painted.

When I first read the comic books, I thought "Man, that guy would make a neat figure."  I never thought we'd actually get one, and here we are!   If you're an old guy, buy this.  If you're a new collector, start your Cantina collection here.   And if you don't know what the fuss is about, you should be similarly put off by the fact that someone has reviewed thousands of these dumb things.   With all the remakes, and the new movies, the days of us getting new-to-toy characters in every wave - or every year - is something we can't count on anymore.   It may sound trite, but count your blessings - this is a big one as far as my interests go, and I am happy to finally have a figure I never actually thought I'd get to own.

This was an important figure for me, too, due to the Marvel connection. I look forward to posing him with Jabba to see how the character was represented in different media. Maybe we can customize a Wuher into Declan Mulholland (the live-action human Jabba originally filmed with Harrison Ford) to add to the Jabba Evolutions.