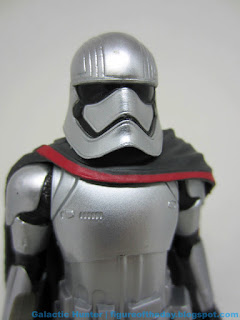 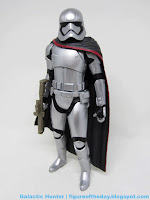 Commentary:  And now, the discount version of Captain Phasma!  This 6-inch discount channel action figure has a blaster in her fist, and it doesn't come out.   The cape is on her back, and the silver paint makes her look just as good as a The Black Series action figure at a fraction of the price.  Her bodysuit isn't painted on the back - you won't know, the cape covers it - and a few of her pouches are unpainted.  Oh, so are the soles of her boots.  Other than that?  She's pretty much as good-looking as the $20ish figure.

If you need a cheap Phasma, this is a good one.  She stands well and has articulated shoulders joining a neck and a waist.   It just plain works - she stands and looks cool.  I love the silver finish, and the blaster lacks the black painted detail of the other counterparts.  She's a little taller than other figures in this segment, and by my count is only the 12th figure in the line so far.  (Hit the tags here to see the rest of them.)  While not a little short for a Stormtrooper, she is short compared to the 6-inch The Black Series figure released in 2015.  Like, a full head and change shorter. 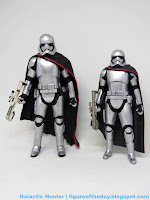 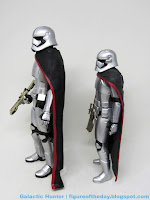 This is the kind of figure I would expect a normal kid - and by that, I mean one that doesn't grow up to be me - would get and really enjoy.  Phasma is a simple figure that just plain works.  Her blaster wrist is jointed, too!   The sculpt looks the same as other larger figures, with deco that's pretty close to the other bigger Phasmas.  It's good.  You should get one given the low price and high quality.  I suspect that you won't, but this is a subline I hope goes on forever with 3-5 new figures per year.  My vote for the next entries - Boba Fett, R2-D2, Princess Leia, and Jyn Erso.

Collector's Notes: I got mine from Walgreens.  This assortment's previous waves hit in the USA at Dollar General, Big Lots, and Family Dollar - I do not know if it will be a de facto exclusive at Walgreens.