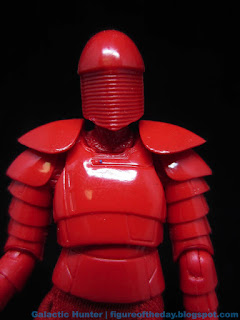 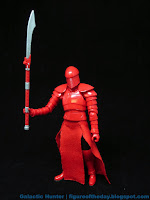 Commentary:  Army builders and villains are staples of Star Wars, so it's good that the Elite Praetorian Guard exists - this Walmart exclusive is super articulated.   It's also presently the cheapest guard you can buy in this scale - the others appearing in a 2-pack with Rey and in a BB-8 playset.   So far Hasbro has released three (announced four) varieties of 3 3/4-inch Praetorian Guard.  I don't know if we've seen all of the costumes, either.

The design is similar to the simpler figure, with a lot of articulation and cloth skirt pieces.   The plastic one looks better, but this poses better - so I'd say you need both.  You may disagree.  You are wrong.   The aesthetics are changed up quite a bit, even though the helmet is the same - but things like bend-and-swivel wrists and articulated elbows greatly change his possible poses.  Or her!  We don't know.   I assume they're going to see more action in the new movie than previous generations of guards, but it wouldn't surprise me if they just stood there like a statue.  I love that it's an action-packed figure that has articulated ankles (not rockers, mind you) and it has no problems standing - but the other version has less than no problems standing. 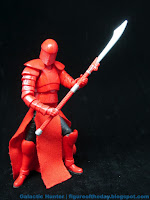 I could see troop building this guy, but I don't know if I should - how many are in the movie?  And in which style?  And are there other accessories coming, or is this it?      The design isn't suddenly better, but the articulation gives it more personality - it's less a chess piece and more a figure of action.   Maybe there's a better turn of phrase for that, but I can't think of it.  Give me time, it will come to me later.   Getting a look at the boots and thigh swivels makes for a more interesting toy, and given its price this is probably the one you're going to want to buy.