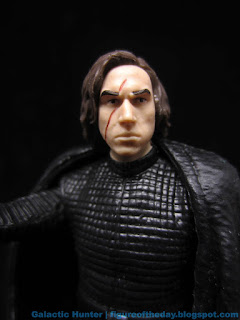 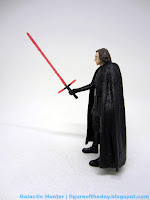 Commentary:  If you're making a new movie, you're going to get more of Kylo Ren.  I got a few emails lamenting this - even though the figure is in a new costume with a new head, some thought we had enough by getting him in the last movie line a few times.   Kylo Ren is kind of like Darth Vader, in that you're going to get more of him.   He's a major player, and even though the figure may look like The Force Awakens  he's new for this movie.  But - three figures share this sculpt so far. 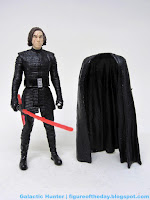 If you're collecting them all, each figure is slightly different.  The other unmasked Kylo Ren with the TIE Silencer has a different Force Link logo position on his foot, and the head is decorated differently.  (Let's be honest - this one is better.)  What makes this figure unique is the cape, often rumored to be an artifact from Darth Vader.  It might merely look like Vader's cape but I don't know.  It's black, it flows, it's plastic.  You can take it off, and the legs are jointed to fit in a vehicle with no problems.  The robes are shorter like that of a Jedi, giving us a better look at his legs and boots.   His arms have that horizontal banding, bringing to mind the original Darth Vader costume. 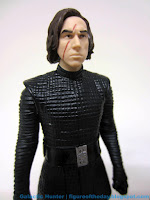 His head has a swell scowl and decent paint on most samples, plus a painted scar that looks great.  His hair is painted far better than his pack-in counterpart, and mine stands without any fuss despite hanging out on my desk for nearly a month.   I would've loved to have a cloth cape, super-articulated version but this is nice too.   Hasbro did a good enough job, and the lightsaber fits in his hand because that's the least any figure should do.  You won't be amazed by this one, but it might be worth picking up.

If you want Kylo Ren in this costume with a helmet, he's currently sold with a Force Link band.   We'll look at that version soon.