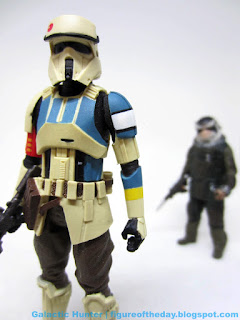 Bio:  Relishing the thrill of action, Bistan fights to ensure the freedom of fellow Iakaru, taking on enemies like Imperial stormtroopers. Specialist stormtroopers stationed at the top secret Imperial military headquarters on Scarif, Shoretroopers patrol the beaches and bunkers of the planetary facility. (Taken from the figure's packaging.) 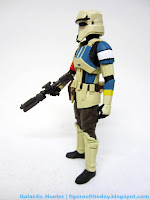 Commentary: Also a "lost" figure, the Shoretrooper Captain  was the third of three varieties of Scarif Stormtrooper from Rogue One.  Hasbro even teased that three versions would be coming, but it looked like it was not to be briefly - mercifully this barely-new mold with very new deco slipped out by mercy of an online store chasing it down.   This is, to date, the only Hasbro figure of the Shoretrooper Captain in any scale.  I assume this might change some day, because it looks like an easy 6-inch or 3 3/4-inch The Black Series redeco down the road.

If you bought a Wave 3 Shoretrooper [FOTD #2,343], you might recognize the core figure as being basically identical.  It's notable that the original plain trooper was made in China and this Captain was made in Vietnam, so there are some very minor changes between the molds - but they're functionally identical  with the Captain having a more rubbery "skirt."   Aside from copyright markings, the other changes are crisper details.  The texture on the thighs are just a little more detailed, and the helmet looks a lot sharper.   The other big difference of course, is a smattering of blue and yellow - the Captain has a lot more color than the rank and file troop.

It's also worth noting that the blasters changed.  The single-carded plain Shoretrooper is blacker and has more detail - certain dongles are missing from the Captain's blaster, which is also a little more brown.   So far it seems that Vietnam tends to make better figures, with China having the better accessories, so if you want the best of everything you'll need to be a completist.   Unless you squint, though, I doubt you'd even realize there was a difference between them. 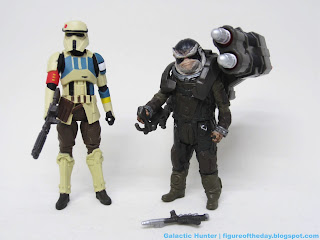 As an unabashed fan of troopers, droids, and aliens - not necessarily in that order - it really stung when it looked like this set may not have made it out.   The deco on this trooper is really top-notch, with a yellow band on his forearm and blue stripes on the body and shoulder.   It would be awesome to have had a chance to buy a lot more of these, but a short-run online release beats no release at all!   Snag it if it's still available, and weep 5 years from now when it costs more.

Collector's Notes: I got mine from Entertainment Earth where it is a de facto exclusive shared with its EE Distribution wholesale wing.   I work there, so you know how biased I can be.