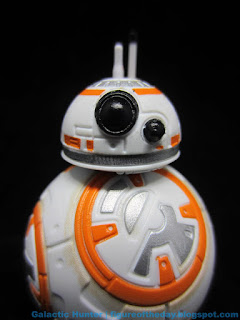 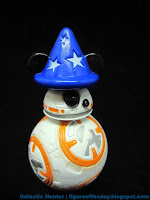 Commentary:  He stole the first movie('s marketing), so it makes sense we should get more BB-8 figures.  Hasbro has not been able to offer all that many, really.  So far he's never been sold as a basic Hasbro figure, always appearing in a bigger multi-pack which I have to wonder may be influence by the licensor - Disney, after all, sells him at theme parks individually or in this set.  Curious.

Anyway, this 3 3/4-inch BB-8 from Disney is larger than Hasbro's offerings from The Force Awakens, with a heavier build and a 4-piece thing that's basically a Weeble.  The figure is basically a two-piece shell that plugs in to a weighted  ball that's loaded with detail - and it's painted, too.    The silver and grey ball is not only stable, but it has little red lights painted on the inside that you may never actually see.  It's a nice detail, but also sort of a waste to put this level of painted detail inside when the outside needs some work.

The figure is painted about as well as Hasbro's models, with some more refined detail in some spots on the body ball, with a less impressive head.  The eye and holographic projector are lacking the outer rings of detail, plus some panel lines are missing.   The black eye juts out in a strange way, but that might just be an illusion due to the big eye being painted entirely black - and not with a grey or silver ring on the border.  The antenna are all white, which isn't quite right - the tips should be grey.  THe light under the central eye is left unlit, but it looks like BB-8 overall.  I figure if Disney spent the deco budget outside the figure rather than on the inside, we'd have the best BB-8 ever made.  Instead, it's just pretty good. 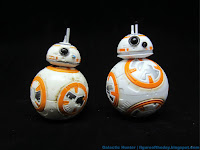 The big surprise to me was BB-8 has a little hole in his head for hats.  You can pop in the magical hat from other sets or anything with clearance for his antenna, and you can even pop his head right off and put it on an Astromech body.  It's a pretty good use of the existing system, even if it is a bit silly.  It can sit upright despite having a round bottom thanks to the weight, but you might need to nudge it to be perfectly upright.  His head can spin, but it can't leer forward like the Hasbro figures could.   It's different - not better, not worse, just a different take on a popular droid. 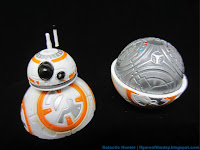 The same mold was used for a carded BB-8 a few months ago at about $13 - and this one has some wear and dirt painted on it, which makes it a little bit better and a little bit cheaper.  If you're on a budget, skip the carded one and just get this set - the individual figure doesn't look all that different, plus you get 3 more droids.   Maybe they'll be in the movie - we don't know for sure yet, but at least they all look cool.  As of right now we don't know how Hasbro's will turn out for The Last Jedi, but maybe it'll be awesome!  For now, this is pretty great.