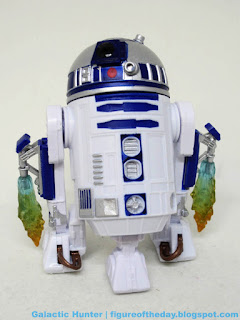 Bio: R2-D2, pronounced Artoo-Detoo and often referred to as Artoo, was an R2 series astromech droid manufactured by Industrial Automaton with masculine programming. (Stolen from Wookieepedia.  Packaging has no bio.)

Commentary:  Since Hasbro is tight-lipped on 3 3/4-inch figures (seemingly assuming collectors  no longer care at conventions), R2-D2 proved to be surprising despite the fact we saw it at HasCon.  There was little chatter talking up how this one was  new or different besides the obvious - jets on a post-prequel story R2-D2 was a pretty big deal.  What caught my be surprise was that this is a barely-altered "build-a-droid" mold!  Unless I'm mistaken, this is the first time Hasbro has sold an individual build-a-droid R2-D2 as a non-exclusive product. 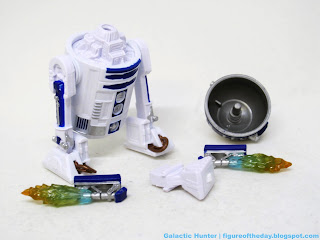 The third leg was the giveaway - it pulls out easily and the shape inside is familiar to anyone who collects these things.   The head pops off fairly easily, and is painted silver with a bare grey interior.  The "neck" under the dome is unpainted white, whereas previous build-a-droids were painted silver here.  It could have benefitted from the paint.  He has a little bit of painted detail on his backside, and mercifully Hasbro still uses the "wire" feet rather than the altered Disney wireless feet.  The biggest change was the torso - the lower holes have since been filled in, and you can see evidence of where they once were. 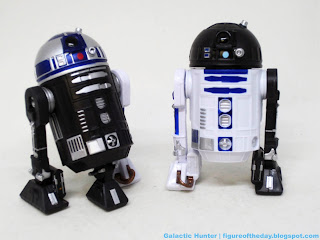 His booster rockets clamp on over the legs fairly cleanly - once removed, you won't see holes for connectors.  It's a clean fit, and there is a slight silver color under them too.  I love the blue-to-yellow flames, and everything just fits.  The body parts are tight, but everything works.   For those pining for more old-style figures, R2-D2 is an old-style figure - you get something that was every bit as good as those build-a-figures from 2007 and a price that's pretty close to what they were in 2007.   If you want more build-a-droid parts for customs and whatnot, or just want an above-par R2-D2, this is worth your while.  The black eye is glossy, the red dot is bright, the silver is clean, and paint coverage is, on the whole, right where it should be.   Unless you've had enough of these parts from Disney a few years ago, this is a worthwhile purchase.