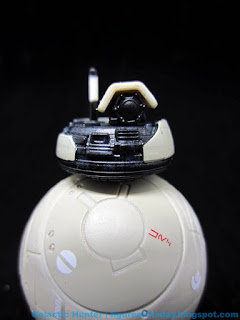 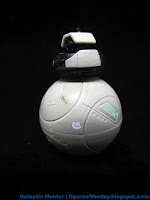 Commentary:  So far all I know about BB-4 is that I thought it was a good figure, but it turns out it could be a lot better.  Disney made a neat looking toy robot with all the fixings - you can pop him apart at the equator.  There's a weighted ball inside.  The colors and angles remind me a bit of an old Kenner Speederbike.  It's distinctive, new and charming.  It also doesn't look like the stills making the rounds online. 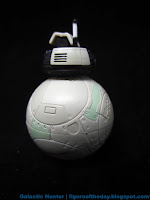 The head seems a bit more streamlined in the movie, with a darker brown, much more dirt and grit, plus a big Resistance logo on it.  The antenna doesn't look quite right, and while the dirt change is very forgivable, the missing Resistance symbol combined with the wrong color chassis makes me think a do-over is likely - maybe from Hasbro, maybe Disney.  I hope there's no running change.

If you want a cool roly-poly robot to keep with your sequel trilogy toys, it's a lovely robot - but like the Kenner Cantina aliens of old, it's off enough to be kind of frustrating.  This kind of thing is delightful if we get corrected figures later, but that's less frequent these days and it's likely to be an ongoing problem as everybody makes toys from unfinished movies.  I can pretend it's another droid entirely, and that's fine, but if Disney can't make a better toy from its own movie and its own source material, it makes it easier to cut Hasbro some slack on their wares.