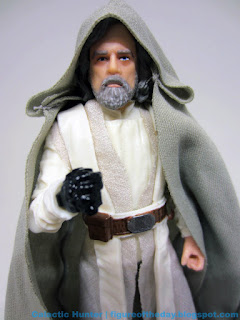 Bio: After tragedy destroyed his attempt to rebuild the Jedi Knights, Luke Skywalker vanished from the galaxy.  Now, the resistance needs his help to thwart the efforts of the evil First Order.  (Taken from the figure's packaging.) 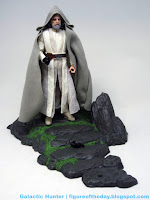 Commentary:  Earlier this year Hasbro almost broke me with their exclusives for The Black Series - and now I'm wondering if I should've quit.   Luke Skywalker is one of several figures getting a plussed up release this holiday season along with Rey, Snoke, and Kylo Ren.  Similar figures are available more cheaply - significantly so in some cases - but each of these new exclusive releases sports a display base, some die-cast metal parts, and enhanced deco.  I don't think you'll be at all surprised when I say that I hope the concept tanks and we just get one release - either the pricey one, or the cheap one.  I don't care which, either.

I will invoke "Just different enough to make you mad" here, partially because this is the third release of this figure.   The first was in a 2-pack at San Diego Comic-Con, and that figure was sold individually in September.  I don't think this new release was ever actually officially announced - which is sort of what makes it maddening.   Had fans known to wait, they probably would because this new version is better, but it may not be better enough.  I like the new materials for the cloth cloak, and the new inner robes as cloth look pretty great.  I like the outer robes too, but the strange sandwich of plastic and cloth may look strange to your eyes.   Since the entire body looks a little different, that's a significant change.  The new version has a better range of motion, but as of now we don't know if this Luke will ever need to sit in a playset or vehicle.  My guess is no. 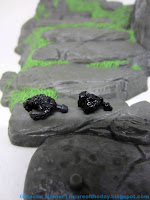 The head has been updated and it's a mixed bag.  The plastic for the face seems a smidgen more ghostly, but it incorporates Hasbro's new printing process seen on Marvel Legends as well as this line.  That's why the figure has exaggerated red around his face.  I don't think it's an improvement, but Hasbro has been pretty excited about the process.  Hopefully they're just getting the kinks out, because it gives the figure an unintended "Dark Side" look.  The same is true with the Punisher from the Netflix wave of Marvel Legends.

Aside from the rocky display stand, the main new piece is a metal fist.  You can pop it in his hand, and it's pretty cool.   It also isn't the right color and it's super glossy, but it shows someone is thinking of ways to make the figures a little more compelling with a "DX" version.   Given the figure costs 50% more than the regular release I would argue the upgrade isn't good enough, and early reactions to this new version have been negatively received by fans that have taken time to reach out to me.  I don't think it's awful - but it could be better, cheaper, or sold in a way where we were informed up front what was coming so we could make a smarter purchase.  I feel like we're in an era where Hasbro is making some high-quality stuff, but those who buy with hindsight a year or two down the road will undoubtedly have a better curated collection at potentially lower prices.   (There's no way this guy isn't going to clearance.)