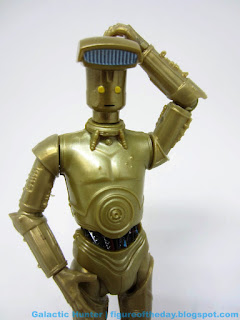 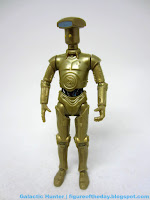 Commentary:  The new head! The Gold Vendor Droid needs to be reviewed - along with other droids - because that's why we're here.  I know that.  We've got a job to do!

The dull gold finish is nice, with a C-3PO body in this sample being the vehicle for a newish head.  The gold head looks good with yellow eyes and a silver... visor?  Price scanner?  What is that, anyway?     The can head with a partial dustbuster hat is sort of out of place, but it's not like anyone has been good at giving us new droids in any sort of realistic style lately.

I appreciate that Disney used the best super-articulated build-a-droid tooling available, but a few months in to having this I wish they made something new, cheaper, and simpler because what the heck do I need ankles for on these guys?  5 joints would have been great, particularly given the dozens of combinations you can build from these parts.   It's a good, sturdy figure with more articulation than any of the main characters in the main line from the last three movies, so... that's where we're at now.   It's a great way to populate the bases they don't make or the vehicles nobody is doing, and being an "animated" figure it has less of a place in any existing collection.  It's a cool souvenir, but it's solely for the crazy collector person.  You know, like me.

Collector's Notes: I got mine from Disney Hollywood Studios.   Thanks Shannon!

I hate when you review a figure 99.9% of us will never be able to get.

What figure would you prefer I review?