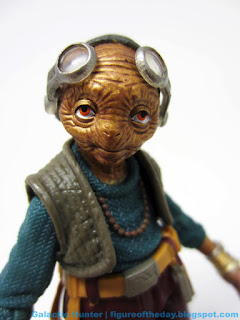 Bio:  A thief whose tattered, threadbare clothes and lackadaisical attitude conceal a sharp mind and expert codebreaking skills, DJ believes there's no difference between sides in this new galactic war.  (Taken from the figure's packaging.) 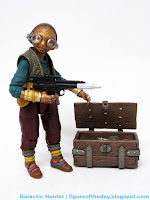 Commentary:  A great figure that's kind of cheap on the Internet right now, Maz Kanata is based on her The Force Awakens appearance - meaning she's got no jetpack and she's not a hologram.   For some reason Hasbro dragged their feet on a number of cool The Force Awakens figures until a couple years after the movie, and this one came out in time for the sequel.   It's a good figure - but it's also about 4-inches tall.   There's a bit more plastic here, but it's basically about the same kind of product as a 3 3/4-inch super-articulated figure at a significant mark-up because of how these things sell in assortments.  Also she has a killer paint job.

Maz has more color in her socks than many figures have on their whole bodies.   The oranges, yellows, pinks, and browns offset a blue sweater with a brown vest, and a brownish orange belt divides the sea of blue from the high-waisted brown pants.   The movie style was inspired by one of J.J. Abrams' teachers, and it shows - you could see her teaching a class.  The rings and bracelets tell a story, as do the big glasses.   I believe these are the first corrective lenses on a Star Wars action figure to see release in a store, as glasses or monocles are rare in this saga.  (See: Noa, Screed.)

Her metallic skin has numerous wrinkes, and it looks stunning.  The light shines off it and gives it a rich sense of detail, plus her eyes are a little less creepy than they are in the movie.   It's kind of fascinating to see so many rings and special details on a figure like this, because it says a lot about the movie design too.   We've seen numerous aged characters eschew adornments.  Jabba the Hutt wears a tattoo and a smile, and he's about 1,000 years old.  Yoda was 900 and had a brown shirt, brown pants, a jacket, and a necklace with a belt.   Maz clearly has a distinctive sense of style with more color and accessories than we would see on most characters across multiple movies.

Articulation is good, and it needs to be given that you're getting a 4-inch figure at a 6-inch price.  Bend-and-swivel joints are used on the elbows and knees, plus she has rocker ankles.  This is good, but the small feet also show Hasbro's ongoing problems with foot pegs.  The holes are so shallow no stand could use them, and there's no other standardized stand for these action figures.   Thankfully her center of gravity allows her to stand unassisted, but with 24 good points of articulation you can get a lot out of her. I was unable to get her thigh cuts to move, but it could just be my sample combined with a fear of snapping her legs off. 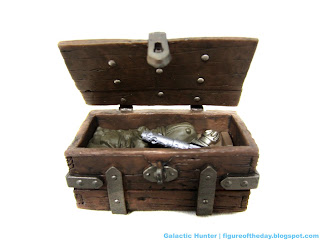 This may be the finest figure in The Black Series in terms of decoration and could even be one of Hasbro's most lavishly decorated action figures.  Most figures tend to be fairly simple affairs with a couple of colors, so this one really did a nice job.  And on top of that you get her blaster, Luke's lightsaber hilt, and a chest that opens.  I wish it had a hinge joint instead of a piece of plastic that bends, but that's how these things go sometimes.   Hasbro did a nice job giving us a weathered-looking wooden box, even going as far as to paint the rivets under the lid.  I am in awe that they bothered, but clearly they got their paint budget's worth out of this one.