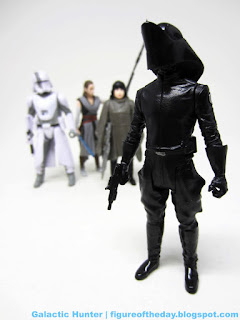 Bio: The First Order Gunners crew the heavy weapons emplacements that dot the surfaces of cruisers and installations.  (Taken from the figure's packaging.) 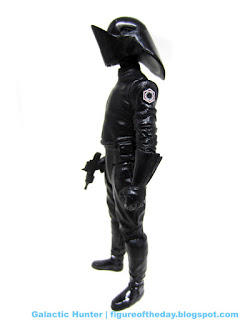 Commentary:  New! The First Order Gunner is barely seen in the movie and reference photos online are hard to find - there's also a LEGO minifigure, but not a lot of details are out there for the costume.  With a massive underbite-looking visor, this figure does a good job matching the LEGO figure and Topps trading cards, which may as well count as reference.  The figure uses stunningly little paint, with glossy gloves and boots plus a First Order symbol on one shoulder.    True to the reference, everything is black and molded in color.  It's almost a crime Hasbro didn't sell these individually as the cheapest figures in their library that are completely accurate.

The 5-jointed figure is a gem.  It stands, it holds the blaster, and it even sits with the legs at a reasonable angle at which they can sit in vehicles.   The thin male body is in a plain black suit with space jodhpurs, obviously because someone is evoking a certain kind of image in our collective cultural memory.  The bizarre, faceless helmet resembles the original Death Star's gunners after an accident.    The little pouches on the belt are a nice touch, and I can't find anything specific I don't like about the figure.  His blaster fits in his hand, and while simple it's an effective toy.   If you see this set, go ahead and get it - three new figures and one deco variant is a pretty good mix.  The Rogue One 4-pack was a little more exciting, but this is still plenty good.

Packaging Notes: This is a good box.   The footprint is the same as the previous Disney movie 4-packs, which were designed to be the same size as the digital download boxes a few years ago so a fan could collect them all on a shelf together.  This isn't widely promoted.  The box itself is much better than the rest of the 3 3/4-inch figure line, with a much better use of the space.  The back has bios for all four figures in multiple languages along with shots of figures that show them with (or without) their accessories, and there's no big use of white space like on the Kohl's set.  Hasbro did a great job here.