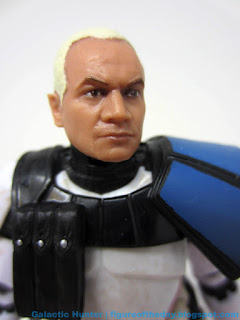 Bio:  Clone Captain Rex served the Republic during the Clone Wars, often taking orders from Anakin Skywalker and Ahsoka Tano. He viewed military service as an honor, and he always completed his mission. (Taken from the figure's packaging.) 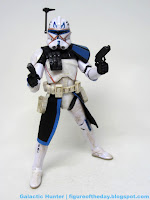 Commentary: Apparently someone like Clone Captain Rex.  There are two major releases - the HasCon release has a "toy deco" head, painted up like all the figures you've seen in the past.  This new non-exclusive one uses the new "realistic deco" we're seeing on Marvel Legends and The Black Series, essentially painting a portrait - complete with glossy eyes - right on the plastic face.  Some look better than others, and this is one of the best.     It's not quite the level of realism one gets from Hot Toys, but for the price and size it's pretty spectacular.  It's far superior to anything else going at this size and price point, and it's so odd to have a photorealistic cartoon character action figure in the style of a movie line. 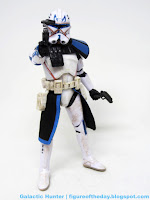 I like the armor deco - glossy white plastic has been massaged with dirty paint, giving a faux-weathered look.   It's OK - it's not as good as the new face technique.   The detailing is still precise and buttons are decorated, with weathering baked in to the blue stripes just as well as we've seen before.  The blasters are a snug fit in the holsters, but they do fit - they fit in the hands too.  A blue stripe on the kama also looks nice, but it doesn't seem aligned perfectly.  On mine, you'll note a little black peeking out.  It's by no means bad - just one of those little imperfections they may some day stamp down. 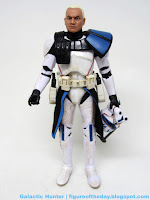 HasCon Rex has the classic-style, simpler face deco.  Main release has a photo printed on the plastic, basically.   The armors are the same.  I'd steer you toward whatever you can get more cheaply - the single box one is pretty spectacular and will likely be the new gold standard against which other troopers are judged.   It's basically the existing Clone Trooper body, but with a new belt, torso, helmet, and head.  And pauldron.  The a skirt.  It's cloth!   It's pretty good too!     This time around the pauldron is affixed in place, not floaty or twirly like some of the others.  Liberal amounts of damage are applied to the armor, as are hashmarks.  You can see where the helmet and armor are welded together with burn marks complete with raised sculpted elements.   I like it and hope they drag in Obi-Wan Kenobi and a few more costumes from The Clone Wars.   Also, this year is the 10th anniversary of that TV show.