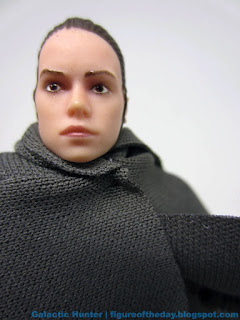 Bio:  With the power of the Force awakening inside her, Rey travels to the hidden world of Ahch-To. There, she seeks out Luke Skywalker as the last hope of the Resistance.  (Taken from the figure's packaging.) 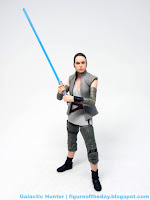 Commentary:  This is great.  The best figure in the line - or at least the best version of the character from Hasbro so far - is Rey (Island Journey) as a 6-inch figure.   With this wave Hasbro started to deploy its new face painting techniques on a grander scale and I'm not 100% sure if this figure uses it or not.  It doesn't look quite as exaggerated as the press photos, in person she looks eerily almost real.  The eyebrows, eyes, and lips have a glossy finish that is a heck of a lot less toy-ey than the last version.   It looks like her - it's good!  It's really good!   Hasbro has a lot of really good human faces, but as of right now I'd say this is the best.

She is nicely articulated - but brings nothing new to the table.   That's not a criticism so much as a resignation to the fact that Hasbro has seemingly decided what these figures can do in 2015 and will never deviate from the ball shoulders, double-hinge knees, rocker ankles, and whatnot.   There are places to hide in more joints but I don't suspect they have an incentive to try them until production costs demand change - either to make the figure look like it has more value, or to bring costs down.   Most of the joints are nicely hidden, but at this point I'd love to see them put some work in hiding the pins in the knees.  Everything else looks superb, and the arms (and especially hands) are perfect to hold her accessories. 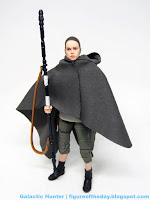 I was surprised just how Hasbro cut the joints.  The elbows are able to bend more than 90 degrees with wrists than bend and swivel as smoothly as you could hope.  I had zero problems getting her hands on the lightsaber hilt.

The hilt is a lot better than the Luke hilts - the detail on the switch is great, and the belt clip is angled when compared to the Luke releases.   I don't really have much to say about the blaster and staff other than they're great at fitting in her hands or holster, so Hasbro did nice work here.

This is probably my favorite 6-inch figure.  Yeah, I know some of you don't like Rey. Fight me.  Hasbro did a bang-up job here and you should buy one.   The cape is great.  The jointing is wonderful. Hasbro, please - assign a Jedi Knight (Jabba's Palace) Luke Skywalker to the designer of this figure.   I want to see how they'll handle it, and then buy several.  Well, OK, one.   If you're new to this line, this Rey might be a great place to start.