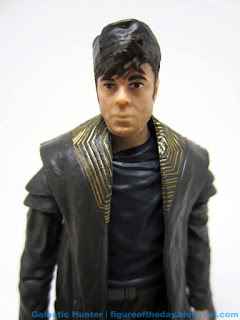 Bio: "DJ," shortened form of "Don't Join," was a human male slicer who resided in the galaxy during the war between the Resistance and the First Order. An amoral thief, he spoke with a stutter but was also skilled at slicing into computer systems.  (Stolen from Wookieepedia.  Packaging has no bio.) 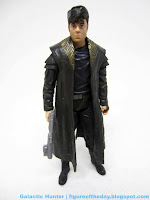 Commentary:  One of the more fascinating things about The Last Jedi is how some really big names play relatively minor characters.  Benicio Del Toro's character doesn't really get a name on screen, but DJ is what the box and credits say.  This isn't the name his parents gave him, and with any luck they may keep it a mystery - a little mystery is welcome after the franchise explained almost too much during the prequel era.

The construction of this figure is familiar.  Five points of articulation and a wrap-around coat make this a lot like figures from the 1970s and early 1980s, preventing the figure from sitting while giving it a strong silhouette and a true-to-the-movie look.  The painted coat lining was a real surprise - it's gorgeous! - but the underpainted rings is a little upsetting.  That's what you get when costs are cut.   Thankfully the sculpt is boffo, with a decent likeness and a slightly less rough looking incarnation of the man who portrayed Dr. Gonzo in one of the greatest movies to take place in bat country.   There's a holster but  his giant rifle is too big, so he'll have to settle for carrying it in his hand. 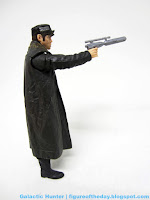 This is possibly the brownest costume of the series, even though the shirt is blue.  The coloring is just so muted,  it's like all life has been sucked out of it.   This makes sense visually - it's not a "grey" character, but it's certainly a murky one.  We've got stark white costumes and pitch black costumes, but heroism and villainy can wear almost any color.   The more mercenary look suits the character well, with a great likeness for a 3 3/4-inch figure and even some sculpted space letters on his hat.  I can't read them, but they're there.  That has to count for something.

As a new character, I was surprised to see this figure sit - but in a wave with new versions of Rey, Luke, Leia, Jyn Erso, and R2-D2 it's only mildly surprising.  I don't think there's a figure collector that expected the fourth nearly identical release of Jyn Erso to outsell an actual new character - a villain, no less - but here we go.  Things are surprising, like the fact that this figure is good and apparently you aren't buying it. What's the matter with you?  This is one of the better figures in the line, and he looks like he could hang out in any cantina or general hive of villainy.  This is one of my favorite new character figures from the movie - it's also one of only four new-from-The Last Jedi named non-trooper characters to get a 3 3/4-inch action figure for this movie so far.   If you don't count pilots, he's only one of two.   There's a reason the press is reporting Star Wars toy interest has been a lot more limited - even with a gem like this, there's a lot less to hold our interest in this increasingly samey era of toys.