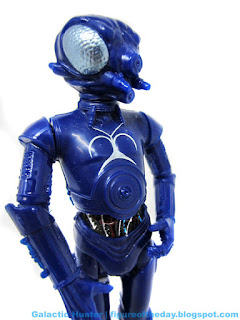 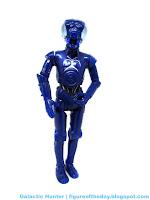 Commentary:  Nifty! The Blue LOM-series Protocol Droid brings us more of a class of droid that really hasn't been seen much.   I don't know where the blue droid with chest pinstriping idea came from, but it's neat.  I'd like to have had Disney do things like this on other colors, as it offers us something truly different.

The blue finish is - as far as I know - unique to this figure.  If there's another fictional instance of this kind of droid, I've not seen it.  The chest on this sample is a 3PO body, with 3PO arms and Death Star Droid legs.  You can build whatever you want.  The light blue metallic eyes look great, but I wish the "face" had some more detailing.  The bare blue is a little light, a couple of painted details would have made a ton of difference.  Since it has no real specific place in the mythos, it's great.   I could put this to work in that Sail Barge we may or may not get, or in that other playset Hasbro will never make.   It has no gun, but it looks cool and seems like it would fit in off-camera pretty nicely.

You don't need this figure.  You really don't.   It's one of those things that you'll ignore now and will either be worthless in 10 years or will cost more than your shoes.  I don't know which, and that's why I bought it now.  Or rather Shannon did, and I paid him back for it, because Shannon is good people.

Collector's Notes: I got mine from Disney Hollywood Studios.   Thanks Shannon!

Hey Adam!
The blue 3PO type body with the nifty white chest pinstriping, is based on a Senate Protocol Droid from an episode of The Clone Wars called Duchess of Mandalore - Chuck Mc

Also wanted to note, the R5-S9 Astromech that shares the scene, was made as
part of the Disney Droid Factory Clone Wars 4 pack, that you reviewed July 24th of last year :)