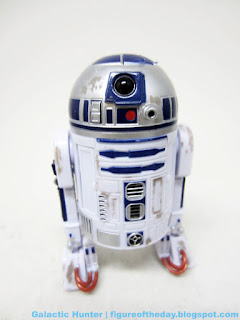 Bio: R2-D2 is a plucky and loyal Astromech droid that aids the Resistance in their conflict against the First Order and takes part in many of the numerous events in the galaxy. (Taken from the figure's packaging.) 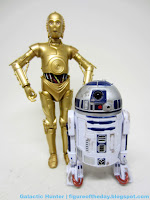 Commentary:  While C-3PO brought a new deco variant with new parts and was effectively a new definitive figure, this R2-D2 is another R2-D2.   Using the same sculpt from 2013, this one bridges the gap of "too dirty" and "too clean."  You could say it's "just right," but if you're happy with the R2-D2 figures you already have this one only offers a new level of dirt.

I would nudge you to the basic figure first - be it the 2013 orange box version or its 2017 40th Anniversary reissue - because of the lightsaber and scope accessories.   This one has places for those attachments, but you'll need to steal them from other droid figures.  The opening panels on the dome are still present, the third leg still rotates down, but this time it has dirt deco on it! That's a real unusual thing in Hasbro's droid toys.     The wheels on the heels are still present, as are the pop-off blue panels for the arm rockets (which are not included.) 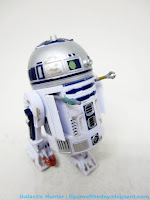 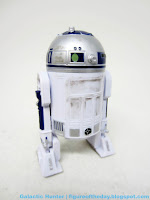 As R2-D2 figures go, it's fine - it's a little different, if lacking in features.  It doesn't bring much new to the table.  The front logic displays - those little rectangles - are left unpainted yet again, but everything else is more or less as it should be. The rear logic display could benefit from being a different color than blue, but it still looks fine.  They did a fine job with weathering the back of the figure, a rare treat as the damage and wear tends to be left off the back side.  Hasbro painted the top panel on Artoo's dome, though, and at this point that's where we need to be.